Question: In the original Arthur, what veteran actor played the butler named “Hobson”?

Last Question:What type of animal was the Wacky Wallwalker toy shaped like? 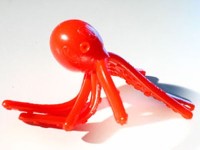 This would only work for a few times until the stickiness wore off, or if it got dust or dirt on it.
I confirmed that these did not stick to people. I performed hundreds tests on my little sister and brother, who were unwilling participants in this experiment.
You could have different competitions. They could be races down the wall, or you could see whose could stick to the wall the longest time before they started crawling down. In the latter competition, you would really huck these as hard as you could against the wall. Good times!

The Wacky Wallwalkers came about when Ken Hakuta received in the mail several sticky octopus-like toys from his mother, who lived in Japan. They were gifts for his children, but he somehow saw the marketing potential in this toy. So, in 1983, he purchased the rights to the product in 1983 for $100,000. Then several media outlets ran stories on the Wacky Wallwalkers, and their popularity took off. You could find them as prizes in cereal boxes, or quarter vending machines.

Over 240 million were sold, and made about $80 million. And teachers to reinforce their drawers of confiscated items.

Here is a Corn Pops commercial that features it’s prize towards the end: