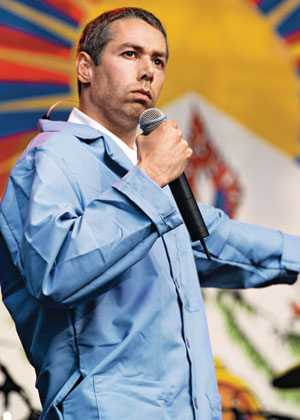 This is getting depressing. We lost another one today. Adam “MCA” Yauch, a founding member of the pioneering rap band Beastie Boys died today, after a three year battle with cancer. According to CNN, Yauch revealed in 2009 that he had a cancerous tumor in a salivary gland. As a result, the band canceled its scheduled concerts and delayed the release of an album.

Yauch, a self-taught bassist and vocalist, underwent surgery to treat the tumor that year.

The Beastie Boys turned Rock and Rap on its head when they busrt on to the scene in 1986 with their album Licensed to Ill. The Beastie Boys have been very active over the years, and have just been inducted into the Rock & Roll Hall of Fame.
Yauch was unable to attend the band’s induction last month.

Yauch was also very charitable. He had converted to Buddhism, and became an advocate for Tibetan freedom.

He founded the Milarepa Fund, which helped raise money for the effort, and organized charity concerts involving the Beastie Boys and other acts, including the first Tibetan Freedom Concert in 1996. Several similar concerts followed.

The Milarepa Fund also organized a 9/11 benefit concert for residents deemed least likely to get aid from other sources.

Yauch also founded Oscilloscope Laboratories, which was active in independent video distribution. Its founder directed the basketball documentary “Gunnin’ For That #1 Spot,” released in 2008.

“Adam was incredibly sweet and the most sensitive artist, who I loved dearly,” said music impresario Russell Simmons, co-founder of Def Jam, which released “Licensed to Ill.”

“I was always inspired by his work,” Simmons said. “He will be missed by all of us.”

Yauch is survived by his wife, Dechen; a daughter, Tenzin Losel; and his parents, according to the band’s publicist.

Here are a few of my favorite Beastie Boys songs, which are all from the Licensed to Ill album:

“(You Gotta) Fight for Your Right (To Party)”

“No Sleep Till Brooklyn”