I do not watch too many “reality” or competition shows these days. But, I’ve been enjoying The Voice. There are no age restrictions, like they have on American Idol. And the talent is totally judged on the voice, and not visual gimmicks. There is criticism about American Idol because some people may advance because they are good looking. In fact, in the auditions on The Voice, the judges/coaches don’t see the contestant until they decide they like their voice, and want them on their team. I think this works because there have been times when there was a good looking singer trying out, and not selected. After the song, all the judges chairs get turned around, and when the judges see the good looking person, you can see them kicking themselves sometimes.
Also, a lot of the singers that don’t make it are more talented than most people that advance on American Idol. They are not just looking for attention to get on television. You won’t find anybody on The Voice dressing like Big Bird. Well except for Cee Lo Green, but he doesn’t count because he’s genuinely “out there”.

Anyway, I’ll get to the point of writing this article. The ’80s is represented!! During the first episode, they showed a quick clip of what will be coming up over the next few weeks during the blind auditions. And I had to do a double-take. Was that who I thought it was? Did I just see E.G. Daily?!? Yes I did. If you don’t recognize the name, chances are that you still know who she is. Some of you younger people (or people with kids) may know her as the voice of Tommy Pickles from Rugrats (“A baby’s gotta do what a baby’s gotta do“) and Buttercup in The Powerpuff Girls.

However, she first got my attention in Better Off Dead. She was in the band and I love this song that she performed:

Here is the full version of the song – “One Way Love (Better Off Dead)”:

I love E.G.’s voice, and I wish her the best. I must admit that the competition already looks incredibly tough, just through 2 days. But E.G. has a unique voice, so I hope it takes her far. I was curious about what song she was going to audition with. It was Faith Hill’s “Breathe”. At first I was disappointed with the selection. I kind of liked the song when it first came out, but very quickly became way, way, way overplayed (like most Faith Hill songs). It got to the point where I would change the station whenever the song came on.

However, E.G. made the song sound fresh, and I loved it!! And if you watch the clip, you’ll find out that I’m not the only one!

So join me in rooting for E.G. Daily!! And the longer she stays on the show, the more of her songs will be available on iTunes.

Last song: “In My Dreams” by REO Speedwagon

Daybreak is a joyful time
Just listen to the songbird harmonies, oh the harmonies

Daybreak is a joyful time
Just listen to the songbird harmonies, oh the harmonies 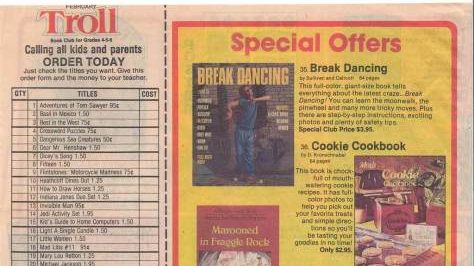 Growing up in the ’80s, if there was anything I liked as much as writing stories, it was reading books. With my love of reading and writing, you would think that I would have enjoyed school. However, this was not the case. The only class I enjoyed was gym. I suppose the problem was that I wanted to read and write what I wanted to and when I wanted to, and not be told what to do.

Anyway, the only thing I liked about school was gym, and the last day before summer vacation. Oh, and there was one I other thing I liked. My heart leaped with joy once a month when the teacher passed one of these out:

I would love reading each book description, and then decide which ones I wanted. And then I would get excited on the day that the teacher gave us the books we ordered. I built up a nice sized bookshelf with these books. Here are a couple that I remember getting (that has pictures online):

I could not get enough of The Empire Strikes Back when it came out. I can’t even begin to count how many times I saw the movie. I also collected The Empire Strikes Back Topps Trading Cards. I also bought this book as soon as I saw it. There were great color pictures throughout the book to go along with the story itself. Later on I got a magazine from the order form, and there was an article in it debating whether Darth Vader was really Luke’s father or not. And this article was the first time that I heard about the possibility that Luke and Princess Leia were brother and sister. Oh yeah, when Luke cut out of his training early, and Yoda told Obi-Wan that “there is another”, I would never have guessed that he was talking about Leia. I mean they freakin’ made out, so it couldn’t possibly be true! That’s impossible! But, after searching my feelings (and seeing Return of the Jedi), I knew this to be true.

Barney and the UFO was another book I really enjoyed. I read this many, many times. Here is a description of the book:

Barney has been moved around so much, he doesn’t want to get close to his new foster family because he’ll probably just have to leave again. His younger brother fits right in, and it’s clear their “parents” like him better than Barney anyway. Then, on a foggy night, Barney meets Tibbo, an alien boy from another planet. He and Barney become friends, and when Tibbo offers to take Barney back to his homeworld with him, at first it sounds like a good idea. But Barney is putting down roots without even knowing it, and soon he will have to choose between his new friend and his new family.

It was a great story, had some great humor in it, as well as action. If I still had it, I would probably read through it again to see if I still like it.

Can you name the Artist and Song:

Here’s some ’80s Easy Listening/Lite Rock today. Can you name the artist and song:

Last Song: “The Next Time I Fall” by Peter Cetera and Amy Grant

Darling, I put my heart upon a shelf
‘Till the moment was right, and I told myself