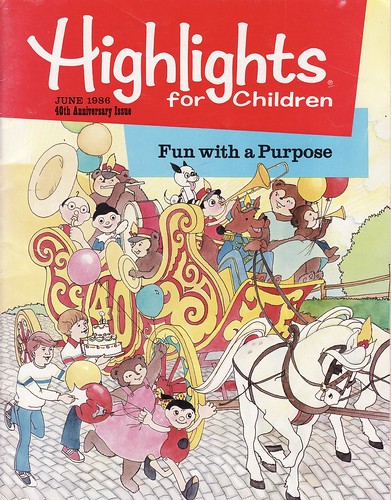 Any child who grew up in the ’80s (or anyone who grew up from 1946 through today, for that matter) had one thing to look forward to when going to the dentist or the doctor. You could guarantee that there would be a Highlights Magazine to read in the waiting room. It would take your mind off of pondering whether you were going to get a shot or not. Although it is geared towards children aged 6-12, it was/is a great magazine for kids of all ages.

Highlights was first published in June 1946, started by Garry Myers and his wife Caroline Clark Myers in Honesdale, Pennsylvania. The company is now based in Columbus, Ohio, and owns book publishers Zaner-Bloser, Stenhouse Publishers, and Boyds Mills Press.

Garry Myers earned a PhD in psychology from Columbia University before World War I. He and Caroline Myers taught illiterate soldiers for the US Army, with the latter becoming the first ever female teacher employed by the Army.

Here are some favorite features that we would see each month:

This feature has been published in every issue of Highlights since the magazine’s inception. It is currently found on page 14 of each issue. You would need to find small pictures within a bigger picture.

This is a comic strip featuring two contrasting boys – one was irresponsible and rude (Goofus), and the other was kinder and ALWAYS did the right thing (Gallant). Often the panels would provide description, such as on a school bus: Goofus hogs his seat – Gallant makes space for someone else to sit down. Sometimes the situations would show the boys talking, such as phone courtesy when parents are away: Goofus: “Someone called but I forgot their name.” Gallant: “Someone called for you. I wrote down their name and number”.
And a more recent example: Goofus would not have crossed out “douchebag” or “kiss-ass know it-all” while describing characters from a children’s magazine – Gallant would not resort to name calling at all to begin with.

The Timbertoes was a comic strip about a family that appears to be made out of wood. The family consists of parents Ma and Pa and their children Tommy and Mabel. There are also animals: their dog Spot, cat Splinter, goat Butter, and horse Troy.

This cartoon appeared in Highlights from the beginning until 1989, then reappeared in 1998. This family of bears included the mother, father and three children named Poozy, Woozy, and Piddy.

Ugh! Even as a child, I thought the jokes were horrible! And there would always be a Knock, Knock joke:

This was a little more interesting than the jokes. There would be about 10 riddles, and the answers would be upside down at the bottom. Here are a few examples:

A. What has a face and two hands but no arms or legs?

B. What five-letter word becomes shorter when you add two letters to it?

C. What word begins and ends with an ‘e’ but only has one letter?

Finally, on the back cover, there would be the “What’s Wrong?” picture. There would be a big picture that has unusual objects take the place of normal things throughout the picture. You then need to find the various objects that are wrong.

What are your memories of Highlights Magazine? It was the first magazine subscription I ever had in my name. Did anybody have any favorite features?