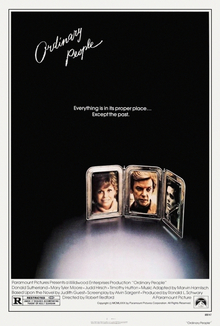 Synopsis: The accidental death of the older son of an affluent family deeply strains the relationships among the bitter mother, the good-natured father, and the guilt-ridden younger son. – imdb

Last time I had seen this? Never. When this came out, I was 10 years old, and not exactly the target audience. I never saw this on cable TV. If my parents rented this, I probably would not have been allowed to watch it.

What I knew about this movie before watching it: I knew this was critically acclaimed, and that Timothy Hutton won an Academy Award for his role in this movie, which was also his first movie.

Despite the fact that this won so many Academy Awards, including Best Picture, Best Director, Best Writing, and as mentioned, Best Supporting Actor, this was a great movie! Normally, Academy darlings are long, boring movies to me. But, this was definitely an exception.

The story is about a family being torn apart after the accidental death of one teenage son, and the subsequent suicide attempt by the other. We watch how each member deals with the events that had occurred. Each relationship is interesting to watch – father/son, mother/son, husband/wife. There are some heartbreaking scenes in this movie, and you cannot take your eyes off of it. This was a very raw, emotional, and great movie. And anybody who comes from a dysfunctional family, at least on some level (and who doesn’t?), then there are definitely some relate-able attributes in this film.

Of course the writing outstanding. But, in my opinion, it was the acting that had the biggest impact on this movie. There were no weak links in this cast.

Most of the serious roles I see Donald Sutherland in, he is creepy. In this movie he plays a father and husband, Calvin, who is trying his best to hold the family together.

Do you remember Mary Tyler Moore as Laura Petrie on The Dick Van Dyke Show, or Mary Richards on The Mary Tyler Moore Show? Well, you’ll forget about all that after seeing her play Beth in this movie. As she and her family are falling apart, all she seems to worry about is keeping up appearances. Nothing wrong here! If this was a true story happening today, Beth would be one of those annoying people on Facebook bragging about how great her life is, even though you know she’s full of crap. As she is trying to keep up appearances, she is just making things worse.

Timothy Hutton won all kinds of accolades for his performance as Conrad. And he deserved every award he got. What is even more amazing is that this was Hutton’s first feature film. Personally, I don’t understand how he was nominated (and victorious) in the Best Supporting Actor categories at the Golden Globes and Academy Awards. The movie seemed to center around his character, so I would have thought he should have been in the Lead Actor categories. He would have won those too. Ah, Hollyweird politics! Anyway, it was very interesting to watch Conrad change throughout the film. You can see and feel him struggle with his emotions. He goes from trying to control his emotions to trying to deal with them. There is an incredible scene where he has a major emotional breakdown, which was his Oscar moment. The event that led to the breakdown, and the breakdown/breakthrough itself got me choked up.

And last, but not least, we have Judd Hirsch. At the time this movie came out, Hirsch was very popular starring in the sitcom, Taxi. His role as Conrad’s psychiatrist, Dr. Berger, seems to have been the inspiration for Robin Williams’ role as Dr. Sean Maguire in Good Will Hunting. Dr. Berger is caring but tough, and doesn’t take any crap from Conrad. If Timothy Hutton was nominated for the lead role (as he should have been), then Judd Hirsch would have won the Best Supporting awards.

Does the movie stand the test of time? Absolutely 100% yes! If anything, it seems like it would be perfect for this angsty day and age.

Worth the Return? Yes, I would highly recommend it. If you had not seen this movie in a while, definitely go and revisit it.

Please let me know if you’ve seen this movie and what you think of it.

If you put your effort and concentration into playing to your potential, to be the best that you can be, I don’t care what the scoreboard says at the end of the game, in my book we’re gonna be winners.

In every time, in every season,
God knows I’ve tried
So please don’t ask for more

Last Song: “When the Going Gets Tough, the Tough Get Going” by Billy Ocean from The Jewel of the Nile Soundtrack (1985) and Love Zone (1986)

Michael (Steve Guttenberg): She did a doodle; your turn to change her.

Peter (Tom Selleck): I’ll give you a thousand dollars if you’ll do it. Great job SouthernHon (@peacesong464), Frida (@carrjam94), and Jim (@JimVilk) as well as Robert’s AP English class once again (@mishouenglish)!!! It’s great to see that our future generation knows all about awesome music – proving that there is hope after all!!!

Hawkeye: Look, I know how tough it is for you to say goodbye, so I’LL say it. Maybe you’re right, maybe we WILL see each other again, but just in case we don’t, I want you to know how much you’ve meant to me. I’ll never be able to shake you; whenever I see a pair of big feet or a cheesy mustache, I’ll think of you.

B.J.: Whenever I smell month-old socks, I’ll think of YOU.

Hawkeye: Or the next time somebody nails my shoe to the floor…

B.J.: …or when somebody gives me a martini that tastes like lighter fluid.

B.J.: I’ll miss YOU. A lot. I can’t imagine what this place would’ve been like if I hadn’t found you here. Loving would be easy if your colors were like my dreams

As we are being buried by a blizzard in the U.S. Northeast, I still have power so far, so we get to play some Remember That Song today!

Loving would be easy if your colors were like my dreams

You say, I cannot get there from here, baby
Then I don’t care where I’m goin’
Here’s to your thin red line
Mmm, I’m stepping over

Here is a live version:

That that poor girl put her trust into the… into the hands of two men who took her life. She’s in a coma. Her life is gone. She has no home, no family. She’s tied to a machine. She has no friends. And the people who should care for her – her doctors… and you and me – have been bought off to look the other way. We’ve been paid to look the other way. I came here to take your money. I brought snapshots to show you so I could get your money. I can’t do it; I can’t take it. ‘Cause if I take the money I’m lost. I’ll just be a… rich ambulance chaser. I can’t do it. I can’t take it.