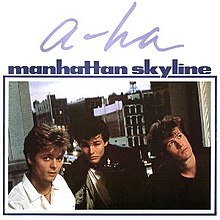 If I had to choose one song that is my favorite by a-ha it would be this one. I love it because it is such a departure from what I had come to expect from the band. I will admit to not liking this song at all the first time I listened to Scoundrel Days; that all changed when I heard them play it live. When I saw a-ha, their second album had just been released and they played most of the tracks from it. “Manhattan Skyline” packed such an enormous punch live that had to go back and really focus on it – and it is brilliant. I am overwhelmed with the raw emotions in the lyrics that are compounded with that harsh guitar in the chorus. The speaker in the song is leaving – going to America. It seems that the end of the relationship is causing some major changes. He is literally starting over by leaving the country and chasing the promise of a new Eden in New York. He says, “How can you say that I didn’t try / You see things in the depths of my eyes / That my love runs dry – No.” Later he is clearly content with his decision to leave, “So I read to myself: / A chance of a lifetime to see new horizons / On the front page a black and white picture / Of Manhattan skyline.” Now consider the music. A clear keyboard sustaining the song’s situation and creating some tension. Then that harsh guitar kicks in enhanced with a driving beat. Hartek’s vocals capture just how much he is agonizing over this decision. The somber keyboard over the final verse reaffirms his thoughts – he is leaving.