Today, we wrap up Robert’s coverage of a-ha’s deep tracks. There will be more bands to come. Please feel free to let us know what you think of this series. Are there any bands you would like to see on here?
Now, the conclustion of this week’s Deep Tracks: 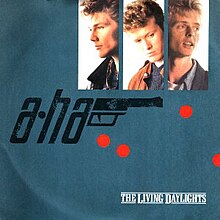 Yes, James Bond fans this is the title song from that Bond film starring Timothy Dalton. The video comes complete with clips and images from the film. The song was written by Paul Waktaar-Savory and it is clearly meant for this particular Bond film. The music has the starts and stops with keyboard burst that surfaces in most Bond themes, Duran Duran’s “A View to a Kill” for instance. a-ha includes an extremely rare saxophone solo of sorts. The lyrics also capture the Bond features in the movie, “Comes the morning and the headlights fade away / Hundred thousand people, I’m the one they blame / I’ve been waiting long for one of us to say / Save the darkness let it never fade away / In the living daylights.” This is not my favorite song by a-ha, but it is serviceable.

The five a-ha songs we covered this week offer some insight to a band that had a meteoric start in 1984, but, in the United States, quickly faded away. a-ha is a talented group of musicians and songwriters who do not completely deserve the “one hit wonder” slur that is typical laid upon them. There are many other songs by them that are as good as the five featured here this week. Spend a little time on Youtube and “take on” a-ha and I think you will agree.