Hi Everybody! Time to continue the countdown. If you missed the previous 10 songs, you can still check them out. This countdown doesn’t have the awesome songs we heard last week. But, there are many songs here that we never hear on the radio. So, let’s Return to the week ending May 24, 1980, and continue the countdown.

This duet by Neil Sedaka and his daughter, Dara, would be Neil’s last appearance on the Hot 100 charts. This is a pretty good soft pop song with a late ’70s sound. Dara has a good voice.

29. “Cupid/I’ve Loved You a Long Time” by The Spinners

I love this medley by The Spinners. “Cupid” is the classic Sam Cooke tune. Hardcore Journey fans may know that Sam Cooke was a huge influence on Steve Perry’s sound. So, I love Sam Cooke. I am not familiar with the other song, “I’ve Loved You a Long Time” by Michael Zagar. I can’t find that song online. It looks like he is mainly known for a disco song called “Let’s All Chant“. The Spinners did a great job integrating the two songs together.

28. “The Seduction” by The James Last Band 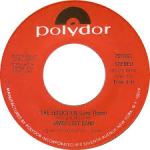 James Last was a German composer. This song, which is the love theme to the Richard Gere film, American Gigolo, is an instrumental jazz tune. So, if you have a hankering for some instrumental jazz, then this song is for you. I kind of like this.

27. “Wondering Where the Lions Are” by Bruce Cockburn

This was Canada’s own Bruce Cockburn’s only top 40 hit in the U.S. The sound reminds me of Starland Vocal Band’s “Afternoon Delight“.

26. “With You I’m Born Again” by Billy Preston and Syreeta

This duet was released as a single from the soundtrack of the Gabe Kaplan movie, Fast Break. I had never heard this song before, but it would be a #4 hit on the Hot 100.

25. “Let’s Get Serious” by Jermaine Jackson

This title track from Jermaine Jackson’s 1980 album was Jermaine’s first #1 R&B hit. The song was produced by Stevie Wonder, who also has some vocals on this song. It was Billboard’s #1 Soul hit for the entire year of 1980, beating out brother Michael’s platinum-certified mega-hit “Rock With You” which was #2 for the year.

24. “Pilot of the Airwaves” by Charlie Dore

I love this song by English singer-songwriter and actress Charlie Dore. It has that country-crossover sound, which reminds me of Juice Newton. The harmonies, on this song, are outstanding as well.

This classic tune by The Clash was their final single released from their 1979 album, London Calling. The words “stand by me” dominate the chorus. However, the song was titled “Train in Vain (Stand By Me)” so us dummies wouldn’t get it confused with the Ben E. King hit.

This is Billy Joel’s second entry on the countdown this week. This is a classic, fun, rock song, which famously begins with sound of glass breaking (probably from the “glass house” of the album title).

This nice ballad came off of Dan Fogelberg’s sixth studio album, Phoenix, from 1979. That album also gave us the classic Fogelberg hit, “Longer“.

That wraps up today’s list of songs. Let me know what you think of this week’s countdown. I can tell you that it is going to keep getting better and better. I am familiar with all of them. They are all very good, yet you don’t hear them on the radio. So, please come back tomorrow and check them out.