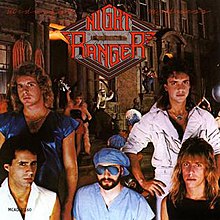 This song captures the same insidious idea of the destructive nature of rumours that can be found in The Great Gatsby by F. Scott Fitzgerald, “Take It On the Run” by REO Speedwagon, and the obvious “Rumours” by the Time Social Club. This song begins with nice keyboards by Fitzgerald that build to a steady beat and a second keyboard melody that sustains the beginning of the song. Naturally, then, a strong rhythm guitar kicks in – but those keyboards never really leave. The solo in this song is played by Gillis and is balanced nicely with the strong keyboards. As one would expect, the rumours in the song are in reference to a couple who seem to be on the outs. The speaker has heard a rumor that, “. . . you have a new friend and lover / Who keeps you warm on the cool, cool nights.” Naturally, he does not want to believe that this is true. Instead, he choose to discuss the evil nature of rumours and how destructive they can be. Ultimately he is forced to admit that the rumours are true, “You used to call me by my first name / Now you never even call me at all / Now you say that I’m the one to blame / Doesn’t matter how I feel at all.” So it’s true. Just like in those other songs and stories, rumours are not a good thing and can put a quick end to things that could be a life long positive.