I am going to go in a different direction today and slow it down a bit. Fans of “Sister Christian” know that Night Ranger can create a power ballad with the best of them and this one is my favorite one from Man in Motion. I love rock ballads and I like a few of them that are about breakups. I especially like breakup song in which there is not bitterness or anger – just an understanding that things have to end (think: Journey’s “Separate Ways (Worlds Apart)). This wrenching understanding is exactly what is happening in this song. There are several lines that carry signs of the end of the relationship: “Every night that I held you / Made Heaven from Hell / I did it for love / Like the change of the season / You grew cold for that reason”, “When you were lost in the night / And you feared for your life / I came running to you / And as I held you so tight / You said forever you and I / But girl I knew.” Clearly a difficult situation, but just like Steve Perry who sings, “You know I still love you”, Kelly Keagy gives us a similar sentiment, “Well, I thought that I was tough / I guess I wasn’t tough enough / I didn’t do it for the glory / I did it for love.” As one would expect the song has a smooth pace and clear, precise instrumentation with an anticipated solid solo (Watson this time). In a decade full of great rock ballads, I wish this one would have received more attention -it is an excellent example of that important sub genre of ‘80s music. Watch the video closely for a slew of infamous figures from the ‘80s and a gorgeous Morgan Fairchild.

How you gonna do it if you really don’t wanna dance
By standing on the wall?
(Get your back up off the wall)

We are back for another week of Deep Tracks, courtesy of Robert! This week, we are continuing with Night Ranger. I am so happy that Robert is tackling a song from Man in Motion today. In 1989, I joined the Navy, went to Boot Camp, and had school. After about a month of leave (vacation), I was stationed at my first base – Oakland Naval Hospital. I didn’t have much music with me at the time, so I promptly joined Columbia House, and got 10 CDs for a penny. One of these CDs was Man in Motion. The only song I already knew about was “Restless Kind“. I loved every song on the CD right away, and it became one of my favorite albums.

Now, here is Robert to bring us “Halfway to the Sun”.

I am really hoping you enjoyed the five songs by Night Ranger that I gave you last week. One thing I have noticed about Night Ranger fans is that they are loyal and they fully understand just how many great song the band has recorded. They also recognize that the band is a bit underrated (as Paul noted last week). So saying, I remain with the view that just five song by Night Ranger is not nearly enough. This week I give you part two of Night Ranger’s deep tracks – five more songs that I am convinced will make you a fan of this excellent band’s music.

Last week I was not able to get in any songs from the Man in Motion album, so this week I am going to start with two; first up is my favorite rocker from this album. When I discuss songs I really like I have a tendency to fall into hyperbole, so forgive me here. This just may be the perfect rock song: strong rhythm guitar and bass, a catchy as hell chorus, and a dynamite solo played by both Brad Gillis and Jeff Watson. I can still remember the first time I listened to this song. Man in Motion was the second CD I purchased (Survivor’s Too Hot to Sleep was first). While I still had my vinyl and cassettes, I was in love with my new CD player, so I exhausted these first two purchases. When I heard “Halfway to the Sun” (track #6), I had to push the back button four times and listen to it again, and again, and . . . I think you get the point. This may even by one of my favorite songs by Night Ranger (period, exclamation point). Musically, it is just too good to deny or turn off. Lyrically, it is solid enough. I love the opening verse, “Well, I’ve been out there thinking about the night before/ How you held me tight / You kissed me like you’ve never done before / Well, I ain’t no politician / But I sure know what was said / I don’t put much weight on promises / That you made to me while you’re laying in my bed.” All of that leads into that catchy chorus that informs us (and her) that she needs to be careful who she is hanging out with because, “When you step out on your conscience / You step out on the run / You won’t step on me ‘cause I’ll be gone / I’ll be halfway to the sun.” This is an absolutely great song that I would put in my all-time top ten deep tracks. 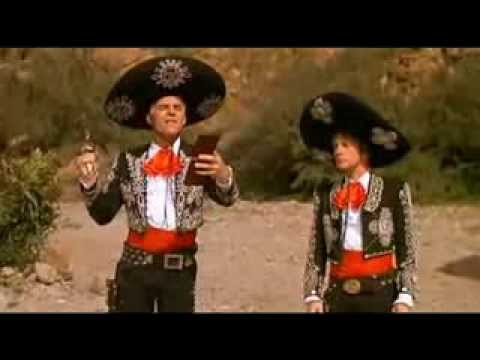 Lucky Day: Oh, great. You killed the invisible swordsman!
Ned Nederlander: [runs over to check] He’s dead, all right.
Dusty Bottoms: How was I supposed to know where he was?
Lucky Day: You were supposed to fire up. *We* both fired *up*.
[aside]
Lucky Day: It’s like living with a six-year old.

How you gonna do it if you really don’t wanna dance
By standing on the wall?
(Get your back up off the wall)

Last Song: “Any Way You Want It” by Journey from Departure (1980)
Great job Mike (@MikeMetcalfJr)!!!

I was alone
I never knew
What good love could do

This song is my favorite track from Big Life and the first video I watched on Canada’s MTV equivalent Much Music TV. I was visiting a relative in Arkansas who had a satellite television hook up, so I watched a few hours of music videos on this station. This song has that typical Night Ranger beginning: a rising keyboard that leads into a great rhythm guitar. Ironically, original keyboardist Alan Fitzgerald would leave the band after the Big Life album because he felt the band was writing too much guitar driven music. This song has great energy that is infectious and video that is linked here really captures that energetic joy. Of the five songs featured this week, “Color of Your Smile” has my favorite solo. This one features both Gillis and Watson who play sort of dueling solo roles. I am one who really likes well thought out and well written lyrics, but occasionally simple ones work best. Here we just have a man who likes to hang out with a woman. He is intrigued by her looks, but knows that it may not last long, “And I’m aware / Of all the friends you’ve gone through / A situation that convinces me / I’m cool on price / But short on my nights with you.” It just doesn’t matter – for a while anyway, “Never had a tougher situation / Lot of trouble with your reputation / I think, I’ll go and take a well deserved holiday.” Great energy – great song – great week of Night Ranger.

I honestly believe that you fans of ‘80s rock liked what you have heard here this week. I admire Night Ranger for continuing to make high quality music throughout the two decades that have followed their ‘80s heyday. They have released six more albums between 1995 and 2014. I have them all and can honestly say that they have not compromised their musical style one bit. They are still true to their California rock roots – as can be heard in this, their most recent video, the titular song from the from the album High Road released in 2014.

Yes, they are older and the band members have changed a bit, but that core of Jack Blades, Brad Gillis, and Kelly Keagy are still together and still making great music. I am finding it impossible to let the band go with only five deep tracks, so next week I am going to share five more. I may also reveal the third tape I bought that day. I do say MAY because it is a bit embarrassing.

Don’t make me angry. You wouldn’t like me when i’m angry.

Who else loved this show?

Last Song: “Suddenly” by Billy Ocean from the album Suddenly (1984)

If the title reminds you of the sometimes forgotten 1987 film starring Michael J. Fox, it should because it was also a part of the soundtrack as well as being on the Big Life album. The song’s verses do fit the film pretty well. If you remember, Fox played a young man who had just graduated from the University of Kansas and was given a job in his uncle’s company in New York City. The second verse captures the desires of Fox’s ambitious character, “I always said I could make it and be who I am / There’s a new look in sight, what a change for the new modern man / With all this it seems like I’m dying for more / The streets are on fire, never seen it before.” While it does fit the film perfectly, it is also true of the band as well. Achieving any sort of success in the music world is not easy. There are plenty of musicians and singers who have plenty of talent, but no one has heard of them. Any sort of success in this field requires a bit of luck and a ton of hard work. The music is what you have come to expect from Night Ranger: strong guitar work, a steady bass, clean vocals (by Blades and Keagy) and a good solo that is quick and a bit understated in this song. Fitzgerald’s keyboards in this song, though, are memorable, coming with a steady rhythm as well as in quick bursts throughout the song. I love the final lyric in this song, “With nothing to show, just sweat from my soul / My heart’s on the line and I’m dying to go / Look at us now / gonna make it somehow / Hold on to me, baby, can’t hold me down.” – a somewhat inspirational ending to an excellent deep track.