If I could go back again
Well, I know I’d never let you go
Back with all of my friends
To that wonderful

Last Song: “Sussudio” by Phil Collins from No Jacket Required (1985)

Oh, if she called me I’d be there
I’d come running anywhere
She’s all I need, all my life
I feel so good if I just say the word

Hi Everybody! This week Robert is taking a break from Deep Tracks. Instead, he is delving into an awesome topic – 80’s songs that feature a saxophone. Along with the synthesizer, I feel that the sax gives songs that classic ’80s signature sound. Perhaps it’s no coincidence that just about the only new song I’ve liked in recent years is “The Edge of Glory” by Lady Gaga. The late, great Big Man, Clarence Clemons (of E-Street Band fame) has a sax solo in that song.

This will be a two-part series, with 5 songs each day. Take it away, Robert

It has been a tough few weeks for fans of ‘70s and ‘80s pop culture. The recent deaths of David Bowie, Alan Rickman, and Glenn Frey have taken many of us by surprise. We have all read about the lives and careers of these great artists, so I am not going to rehash all of that information. As I have been thinking about these three, I keep coming back to Glenn Frey, both his solo work and the music he created with the Eagles. For years I have enjoyed the great songs that he created on his own or with the legendary band. I vividly remember buying the Eagles single “New Kid in Town” and listening to it over and over again, each time feeling sadder and sadder for the new kid. As I moved into high school and college I gained a huge love and respect for all of the Eagles’ music. Frey’s solo work was also outstanding. Songs like “The Heat is On” and “Smuggler’s Blues” were on dozens of mixtapes that I made- forcing my friends to listen to these great songs.

Over the past week I have listened to many of Frey’s songs and have rediscovered two of my favorites, “The One You Love” and “You Belong to the City.” I also remembered that one of the reasons I love these songs is the use of the saxophone. Naturally, this lead me to thinking about other ‘80s songs that have the prominent use of a saxophone. It took some deep trips into my memory and a little research, but I have come up with my ten favorite ‘80s hits that feature the smooth sounds of the sax; I am defining “feature” as having, at minimum, a sax solo. This is by no means meant to be a comprehensive list, just my favorites and a nod to Glenn Frey whose music got me thinking about it. So here they are – in no particular order, my favorite ten ‘80s song with a clear saxophone element being used.

“The One You Love” by Glenn Frey

I begin this list with the song and artist that is the inspiration for this list. This is my favorite solo hit by Frey and comes from his debut solo album No Fun Allowed in 1982. The song reached #15 on the AT 40 and, while that is a respectable chart position, it does not really capture the full quality of this song. The saxophones are played by two musicians; the repeating theme in the song is played by Ernie Watts and the solo sax at the end of the song is played by Jim Horn (no, this is not a pun). This is a slow paced, somber tune that depicts a moral dilemma. The woman in the song is trapped between two men and must make a choice that is going to have a profound effect on both men, “Someone’s going to cry when they’ve learned they lost you / Someone’s going to thank the stars above.” Each man speaks to a different side of the woman which makes her decision extremely difficult. One of the men has hurt her before and the one she is with now treats her well, but she is not crazy in love with him. The chorus ask the question that is perfectly captures her choice: “Are you going back to the one who loves you / Or are you going to stay with the one you love?” There is no easy answer to this difficult situation, but we do know that this song gets Frey’s solo career off to an excellent start.

“Fortress Around Your Heart” by Sting

I will confess to being a huge fan of the Police and Sting due to the songwriting. My English teacher self loves Sting’s lyrics full of symbolism, imagery, and metaphors – call me a literary geek if you want, I will fully acknowledge and accept the label. On Sting’s first two solo albums, Dream of the Blue Turtles and Nothing Like the Sun, he seems to be trying to stylistically separate himself from the Police. He has abandoned the reggae influences for a more jazz based sound, hence the prominence of the horns. The saxophone on this track is played by the incomparable Branford Marsalis. The sax is spread throughout the song and blends nicely with Sting’s bass and guitar work. This will always be my favorite Sting song because of the lyrics. He takes an unusual twist and uses war imagery to capture a man who is regretting the way he has handled the relationship with his love. He wants to protect her, but he may have taken this to an extreme and now feel remorseful, “I recognize the walls that I once made / Had to stop in my tracks for fear of walking on the mines I’ve laid.” I believe his intentions were good, he just let things get out of hand. The chorus captures both this and his regret in doing so: “And if I built this fortress around your heart / Encircled you in trenches and barbed wire / Let me build a bridge, for I cannot fill the chasm / Let me set the battlements on fire.” I have always been a huge fan of Sting’s songwriting and this song is a prime example of this. I am looking forward to seeing him at the NBA All-Star game in a few weeks.

I have absolutely no problem in declaring my love for Wham!’s album Make It Big. It was one of my favorites in high school and my best friends and I nearly wore the grooves off of the record. This particular song ended up as the #1 song of 1985 (“Wake Me Up Before You Go Go” was #3) and I have always been fascinated with the raw emotions of the lyrics. The gorgeous saxophone is played by Steve Gregory and truly carries this somber song. When people think of this song Gregory’s excellent sounding horn comes to mind immediately. While this song is from the Make It Big album, it is a solo effort by George Michael and it clearly played an instrumental role in him embarking on a solo career soon after it’s success. The song is one of regret. The speaker has made an enormous mistake and lost his love, “Should have known better than to cheat a friend / And waste the chance that I have been given.” Now he is realizing that he has lost a very special relationship and realizing he can never get it back, “I’m never going to dance again / These guilty feeling got no rhythm . . . So I’m never going to dance again the way I danced with you.” The chorus is agonizing and full of guilt and hopelessness – he know he has lost her forever because of something he did. I am always caught by the bridge in this song, “Maybe it’s better this way / We’ve hurt each other with the things we want to say / We could have been so good together / We could have lived this dance forever / Now who’s going to dance with me.” As an adult who married his high school sweetheart, this song has always stayed with me and serves as reminder of being true to the one who is most important in my life.

This 1983 hit may now be best remembered for making an appearance in Sixteen Candles – remember the dance scene?

This is Spandau Ballet’s only significant hit in the U.S., putting this song on the category of one hit wonder. If you only get one hit, it might as well be a memorable one like “True” that still makes us stop, listen, and reflect on our high school days. This slow jam of a song is a perfect fit for and a staple of high school dances in the ‘80s. I have fond memories of standing up against the wall, too embarrassed to dance to the fast songs and way too scared to ask anyone to dance to this one. Most memorable are the smooth vocals by Tony Hadley, the simple and repeating guitar plucks and the sax by Steve Norman. There is not much about the lyrics that has not been said, so I offer you a challenge: play this song sometime soon and try not to sway back and forth and hit those “dunt dunt (pause) dunt dunt” sounds. You can’t resist – and neither can I.

I love Foreigner and the album 4 that this song comes from is one of the major reasons why. There are truly no bad songs anywhere on this album. This album, released in 1981, had five AT 40 hits with “Urgent” hitting #4. This is a great rock song with great guitar work by Mick Jones and Lou Gramm’s signature vocal style. The unforgettable sax solo is played by Junior Walker while the rest of the sax is played by Mark Rivera (although the video does not suggest this). The song as about a woman who just seems to have a burning need to be with the speaker. This is never meant to be a long term relationship, rather a quick-hit whenever needed. I have always enjoyed the pace of this song, lyrics included. I love the way they phrase lines like, “You play trick on my mind / You’re everywhere but you’re so hard to find / You’re not warm, you’re sentimental / You’re so extreme, you can be so temperamental.” This is a fantastic song that played a large role in getting me into music. Years later (1986) when I started dating my future wife, I quickly discovered that we do not have the same passion for or taste in music – except for this album. “Urgent” and 4 was one of the first albums we listened to together and, when it comes on now, we both really get into it. 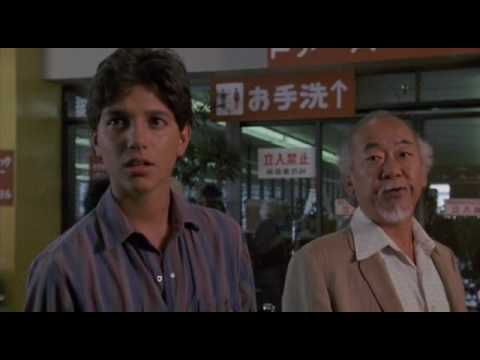 [Walking through the Okinawa airport, Daniel and Miyagi find a poster advertising Sato’s karate school. The poster shows Sato breaking a log with his bare hands]
Daniel: Hey can you break a log like that?
Miyagi: Don’t know. Never been attacked by tree.

Oh, if she called me I’d be there
I’d come running anywhere
She’s all I need, all my life
I feel so good if I just say the word