Hi Everybody! Robert is back this week with some one-hit wonders of the ’80s. Every decade has had their share of one-hit wonders. I may be a little partial, but I think the ’80s had the best of the best! This week we will feature one song a day. Take it away, Robert!

What draws us to songs by bands who appear, have a great song, and then disappear? Encarta Dictionary defines One Hit Wonder as, “A musical performer, group, or composer who produces one hit song and then has no further success.” This phenomena of the One Hit Wonder is firmly entrenched in ‘80s music lore. The decade is riddled with songs that reached peak positions on all sorts of charts and received hours and hours of radio airplay. Some of those songs still surface on a variety of stations – AND WE LOVE THEM! I have no good explanation for what draws us to these songs, but we are drawn – and we sing (and sometimes dance) to them at the top of our lungs, enjoying every note as we are transported back to the heyday of our youth.

A few days ago one of these songs came on the iRadio ‘80s channel while I was doing some school work. Predictably, I stopped the work and sang at an extremely high volume. This sparked my desire to revisit more of these One Hit Wonders. I love these songs because they allow me to break my routine and experiment with genres I usually do give much time to. They allow me to step out of my box and enjoy something a bit different and even a guilty pleasure or two. I have made my list and narrowed it down to twenty (or twenty-five, still a few on the bubble) songs that perfectly represent this much beloved category. Over the next few weeks, I give you some of the best One Hit Wonders of the ‘80s.

“Let’s Go All the Way” by Slyfox 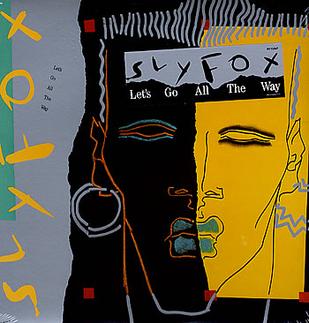 This is the song that was playing on iHeart radio that day and it has served as my Muse for this series of articles. Slyfox is a duo made up of Gary “Mudbone” Cooper and Michael Camacho who released this song in 1986. This song reached #7 on the AT40 and received plenty of airplay at my and my best friends’ house. All of us instantly put this song on any mixtape that we were making for anybody. While there is no official record keeping in existence, I am pretty sure you hold the world record for number of times “Let’s Go All the Way” was played. This song’s beat is infectious! It is impossible to get it out of your head even after just one listen (you’re welcome). The lyrics depict a modern world full of confusion and struggles; a world where just getting by is an ify proposition. The third verse even gets a little bitter and cynical: “Living in New York looks like and apple core / Asphalt jungle, got to be a man of war / California dreamers sinking in the sand / The Hollywood Squares are living in Disneyland.” The video has an antiwar slant to it, but the overall message is a bit muddled. I have listened to the entire Slyfox album and this is the only song of note. This is easily my favorite One Hit Wonder because it is catchy as all get out and it is the duo’s only real hit song – a perfect fit for the definition.