Today, Robert wraps up this week of one-hit wonders. If you missed the previous songs, they were:

Now, here is the final song of the week… 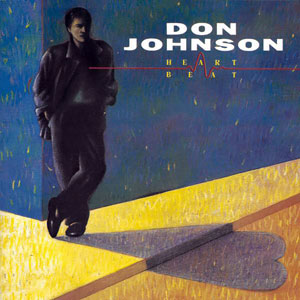 Let’s keep the actor turned singer theme going today. Don Johnson is a much more famous actor than yesterday’s Jack Wagner and in 1986 he parlayed his acting success in Miami Vice into an album and hit single. “Heartbeat” reached #5 on the AT 40 and the album included videos for each song that worked together as a long play video that told one complete story. Don Johnson is not a fool and he asked trained musicians to work with him on the album; the song “Heartbeat” features the guitar being played by Dweezil Zappa. This song (and the others on the album) fit into the rock genre. It is not complex and the vocals are just adequate (not Steve Perry here), but it is catchy and difficult to ignore. Lyrically it is less complex – a guy looking to fall in love. He is getting close:

Looking at me, it’s easy to see
You think you know just how I feel
But you do me wrong, it won’t take me long
For my restless heart to heal

I will be completely transparent here – I love this song and album. I am a sucker for guitars and bass, as well as a sappy ballad and this album has all of that. I still listen to it frequently and enjoy it every time. Unfortunately, the video for “Heartbeat” which feature Don Johnson playing a reporter covering a war, it not available. The videos to the other songs on Heartbeat are, so check those out.

I hope these songs have rekindled an interest in an artist you have not listened to in a while. So, go back into the record or cassette collection, pull one of these albums (or singles) out, listen and enjoy. Come back next week for five more One Hit Wonder classics.