Party All the Time by Eddie Murphy 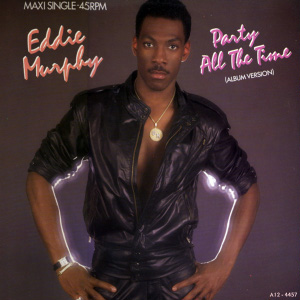 For the each of the first two weeks of this One Hit Wonder series I have one actor who turned singer and I can see no reason to deviate from this, so here is this week’s actor. Growing up – and even today – I LOVE EDDIE MURPHY! Way back when my best friends and I were allowed to watch his stand up Delirious and quickly moved through 48 Hours and all of his other films, I have diligently studied his work. Oh, ok, you got me – no studying, just laughing my butt off. Yes, it was very strange for him to record a music album – and Rick James’ presence may be even stranger, but this catchy song absolutely deserves a place in the all time great One Hit Wonder of the ‘80s. The song reached #2 on the AT 40 and finished at #7 for the entire year of 1986. This song, written by Rick James, was kept out of the top spot on the charts by Lionel Richie’s “Say You Say Me” – so close, but a worthy song denied the peak spot. Lyrically, this song is the ultimate in simplicity. A guy is ga-ga over a girl and is trying to give things that she likes:

The source of his frustration lies in the catchy-as-hell chorus, “My girl wants to party all the time.” She does not seem to be taking his efforts seriously. By song’s end, it does not seem that the situation will come to a satisfying conclusion for him, “You never come home at night because you’re out romancing / I wish you bring some of your love home to me.” The song is light, but I love it! Murphy’s ‘80s musical career did not last long, although he will release another album So Happy, in 1989 but he would have no more hit singles.