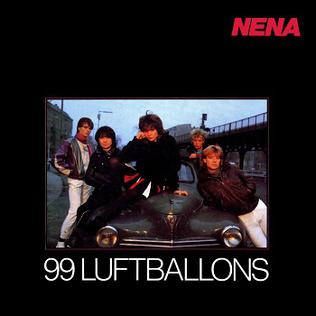 Yes, I am going back to Europe! So far on the One Hit Wonder series I have had several songs that were absolute monster hits overseas: “I Don’t Like Mondays”, “Wouldn’t It Be Good”, and “Der Kommisar” were all hits here, but have been tossed into the One Hit Wonder category. This song by Nena is an anti war protest song whose German title is “Nuenundnuenzig Luftballons”, is a narrative that depicts the story of an misunderstanding. A large bunch of balloons is floating through the sky and are mistaken for a UFO or nuclear weapons. Unfortunately, this results in a war which ends with no clear winner and both sides completely devastated. The final verse captures the irony of the entire situation:

Once the truth of the misunderstanding is understood, it is too late. The speaker releases ninety-nine more red balloons in honor of what was lost. Note: I once again deferred to my wife’s expertise with German- she says the translation is not as good as After the Fire’s translation of “Der Kommisar” – but it tells a similar story as the German lyrics that is a bit softer, but captures the same sentiment.

99 balloons
on their way to the horizon
People think they’re UFO’s from space
so a general sent up
a fighter squadron after them
Sound the alarm if it’s so
but there on the horizon were
only 99 balloons.

99 fighter jets
Each one’s a great warrior
Thought they were Captain Kirk
then came a lot of fireworks
the neighbors didn’t understand anything
and felt like they were being provoked
so they shot at the horizon
at 99 balloons.

99 war ministers
matches and gasoline canisters
They thought they were clever people
already smelled a nice bounty
Called for war and wanted power.
Man, who would’ve thought
that things would someday go so far
because of 99 balloons.

99 years of war
left no room for victors.
There are no more war ministers
nor any jet fighters.
Today I’m making my rounds
see the world lying in ruins.
I found a balloon,
think of you and let it fly (away).