Voices Carry by ‘Til Tuesday 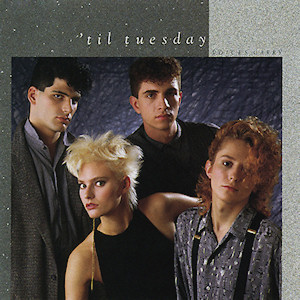 The lyrics to this somewhat chilling song were written by lead singer Aimee Mann and depict an unfortunate and domineering relationship. The woman in this song is looking at her relationship with her boyfriend and coming to the realization that he is emotionally abusive. She says that she is falling in love with him, but she is unsure of his thoughts because he is not forthcoming and his thoughts scare her a bit:

I’m in the dark, I’d like to read his mind
But I’m frightened of the things I might find
Oh, there must be something he’s thinking of
To tear him away
When I tell him that I’m falling in love
Why does he say

His response to her revealing her feelings is the song’s chorus, “Hush, hush, keep it down now, voices carry.” Is he embarrassed about being with her? Or is he emotionally unavailable? The next verse gives the listener a partial answer – and it is not a positive one:

He wants her to behave as she is told – be seen and not heard. This possible dangerous situation is reaching a breaking points as she is coming to the realization that this is not the best situation. She must admit to herself that, “He wants me only part of the time / He wants me if he can keep me in line.” In the video, the actor playing her love interest does an excellent job in being a jerk, but he has to because this is the essence of the song. This is ‘Til Tuesday’s first single and it reached #8, but like everyone else in this series, the great start fizzled and they quietly faded into the background of ‘80s music.