Top 10 Protest or Socially Conscious Songs from the ‘80s

I recently finished a wonderful Young Adult (YA) novel by Todd Hasak-Lowy entitled Me Being Me is Exactly the Same as You Being You. What I liked about this book wasn’t the story – it was fine, not outstanding, but fine. What I was captured with was the format of the narrative – it was told completely in a series of list. This very inventive story had characterization, setting, climax – everything, but it all had to be put together by the reader through lists! I loved it and found it a groundbreaking way to tell a story. More importantly, it has rekindled my love for lists. So, coming at you for the rest of 2016 will be a series of lists of my favorites from the ‘80s. This first list will be my top 10 favorite protest or socially conscious songs from the decade that does not get enough credit for being serious when times called for it.

There are those who find protest song tedious and there are those who seek protest songs and work to ‘feel’ the issue. I fall somewhere in between. I like protest songs and I use them as a springboard to learn more about the issue that the song is focused on. I do not seek out protest songs, but I do love the insight that most of them give on human life and the struggles we face. I have always loved looking for and understanding songs that have a clear socially conscious message. So as not to cull protests from you, ‘80s fans, here is my list.

Born in the U.S.A. by Bruce Springsteen 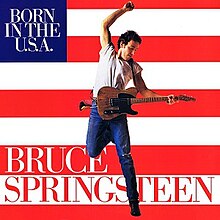 We all have our pet peeves. I am no different, so here is mine: it drives me absolutely bonkers when there is a patriotic celebration, like 4th of July fireworks, and I hear this song blasting from the speakers. Are we really that ignorant of lyrics and their meaning? Can the general public not understand tone? Born in the U.S.A is nowhere near a song that celebrates America’s heritage. In fact, it is quite the opposite. In this song, Springsteen sings about the poor treatment of America’s fighting men who have returned home from Vietnam. Despite the recent Veteran’s Day celebrations, we should not forget that not that long ago, many of those veterans returned home to very poor treatment. Springsteen writes:

Came back home to the refinery

Went down to see my V.A. man

He said, “Son, don’t you understand”

No, they did not understand why the country they risked their lives to defend was not treating them in such an unwarranted way. Yes, despite being just a baby during this time, I do know of the public perception of the war in Vietnam, but Springsteen sees them all as excuses and his tone suggests that they are completely ridiculous. The Vietnam vet, who is the speaker in this song, ends by revealing his desperate situation:

Down in the shadow of the penitentiary

Out by the gas fires of the refinery

All of this is framed with the sarcastic chorus, “Born in the U.S.A” – in essence, how can a man who fought for his country, who lost his brother in the same war, now not get a job now that the war is over? Please, for me, the next time you hear this song played for a patriotic celebration, turn to the person next to you and explain what the song is about.