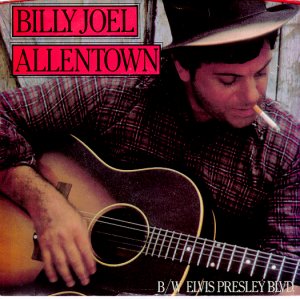 Billy Joel is another excellent song writer from the ‘80s who hit with songs like Uptown Girl, Tell Her About It, and later in the decade We Didn’t Start the Fire. In 1982 he released Allentown, and while it only reached #17 on the Billboard weekly charts (but #47 on the year end charts), this song packs an enormous punch. Joel describes life in Allentown, Pennsylvania, a typical coal mining town whose residents are dependent upon that coal and working in those mines for a living. The young people in Allentown are becoming restless because the life that they were promised is not coming to fruition. Their parents and teachers all promised them a comfortable life working with coal, but it is not happening:

It is becoming harder and harder for these young people to stay in a town that is economically dying. This now becomes a metaphor for the working class in the Northeastern United States. This area once had an industry that was booming and could easily support those who were willing to work for it. Now, times are changing and, while the will to work is still there, the money is not.

Well we’re waiting here in Allentown
For the Pennsylvania we never found
For the promises our teachers gave . . .
So the graduations hang on the wall
But they never really helped us at all
No they never taught us what was real

Ever since the first time I heard this song, these lyrics have stick with me and still stand out today:

Billy Joel is trying to draw attention to a part of the country that is dying. An industry that was once vital to American life is now being left behind; those who are being left behind are suffering, caught in a situation not of their own making and not knowing what to do, caught in a trap of, as they see it, lies.