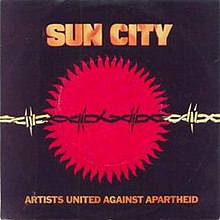 I caught this video Frankfurt, Germany one night while I was waiting for a live football game to begin. American Forces Network (AFN) was the only TV station Americans living overseas in the ‘80s had to watch. We got one football game every week and when there was a delay in picking up the satellite feed, AFN filled the time with music videos. This one caught my eye because, like USA for Africa’s “We Are the World”, I wanted to identify all of the artists. This song has vocals from, to name a few, Run DMC, Hall and Oates, Kool Moe Dee, Kurtis Blow, Lou Reed, Pat Benatar, Bono, and Bruce Springsteen. The song was used to raise money to fight Apartheid in South Africa. In short, Apartheid was legal racism against the native South Africans endorsed and practiced by the white Europeans who ran the country. It was during this time that Nelson Mandela was kept in prison for trying to end the horrific policies of Apartheid. Sun City was a luxury resort and casino that was visited by celebrities from around the world. It gave a major, consistent boost the South Africa’s economy, so it was seen by those who felt apartheid was a violation of human rights as to hurt the South African government and put pressure on them to end Apartheid. The lyrics are pure protest:

No, this is not great, earth shattering writing, but it did help raise awareness in Americans who did not know much of what was happening in South Africa. Side note: if you have any interest in Apartheid in South Africa I recommend two books – Kaffir Boy by Mark Mathabane (non fiction) and The Power of One by Bryce Courtenay (fiction).