Lives in the Balance by Jackson Browne 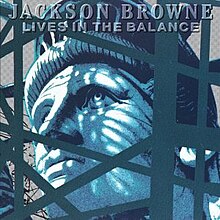 I did not know much about Jackson Browne other than his song “Somebody’s Baby” from the Fast Times at Ridgemont High soundtrack. Then a friend talked me going to Denver to see Browne. I was skeptical, but fell in love with his music. He is a great songwriter and this song is the most biting on this list so far. Browne does not pull any punches:

I do not think much explanation is needed here. Many times these protest songs carry plenty of weight with the lyrics, but the chorus is seen as less important and does not have that typical catchy chorus feel. This, though has both meaning and a catchy sound:

Simple, yet effective. This type of in your face protest song bothers some people. While I understand why this is, I like to think that we need these type of songs to get us to reexamine our beliefs and policies. Things might not change, but they might if change is needed.