Your pop caught you smoking, and he said: “No way!”
That hypocrite smokes two packs a day

Question: In the film The Goonies, what is the name of Chunk’s famous dance?

Last Question: Which rap band was blamed for the theft of thousands of Volkswagen badges from cars? 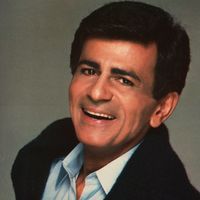 Welcome back to this week’s countdown! If you missed the previous songs, you can go back and check out 40-31, 30-21, and 20-11. This has been a great week of music so far, and it continues today. It was so good, that we will be coming back with another countdown next week, with a twist! We will Return to the top 40 countdown for the week of March 6-12, from the UK! I know there is a huge following here of folks from the U.K. So they will get to relive their past, and 80s fans from the U.S. may discover music that did not make it over here for one reason or another. But first thing’s first. Let’s Return to the week ending February 28, 1987, and check out the top 10 songs of this week.

This was the end of Lionel Richie’s run in the ’80s. A sweet song to end it. Supposedly, it was written for Lionel’s daughter, Nicole.

Peter Gabriel had some groundbreaking videos in the late ’80s. Which means that they were on MTV every other song. Which also means that I couldn’t stand it! I was dreading listening to this again, but now I’m liking it a little more.

You got my rock in your rap! You got your rap in my rock! What?! Mmmm, delicious. Two great genres that go great together.

7. “Respect Yourself” by Bruce Willis

Bruce Willis hopped on that actors-turned-singers bandwagon. And he did a very respectful job of it, in my opinion.

6. “Somewhere Out There” by Linda Ronstadt & James Ingram

At this time, I was too cool to watch cartoon movies. So, I’ve never seen An American Tail. But, I do love this song. Such a perfect duet with two incredible voices.

Nice ballad from The Jets, written by Rupert Holmes (“Escape (The Piña Colada Song)”), and sung by 13-year-old Elizabeth Wolfgramm.

If Chicago is asking us if we will still love them after the departure of Peter Cetera, the answer is Yes!

3. “Keep Your Hands to Yourself” by Georgia Satellites

Between this, and Janet Jackson’s “Let’s Wait Awhile” earlier in the countdown, all we need to do is substitute Samantha Fox’s “Touch Me” with Jermaine Stewart’s “We Don’t Have to Take Our Clothes Off”, and we would have a perfect countdown for a Catholic school dance.

Hands down, this is my favorite Huey Lewis and the News song. “All I want from tomorrow is to get it better than today.” That’s all anybody can ask.

Bon Jovi had a huge hit with “You Give Love a Bad Name”. But, this ’80s anthem is the one that changed them forever. When you say the words “’80s music” to somebody, this is one of a handful of songs that would immediately come to mind. This is totally deserving of the #1 spot, and a great way to end the countdown.

That’s it for this week. I hope you enjoyed this countdown. Please let me know your thoughts. And as I mentioned earlier, we will be coming right back next week with the UK Top 40 from 1983. Until then, Keep your feet on the ground, and keep reaching for the stars.