Sam: You are the nuttiest, the stupidest, the phoniest fruitcake I ever met!

Diane: You, Sam Malone, are the most arrogant, self-centered son-of-a-

Sam: Make you?… My God I’m, I’m gonna… I’m gonna bounce you off every wall in this office!

Diane: Try it and you’ll be walking funny tomorrow… or should I say funnier?

Sam: You know… you know I always wanted to pop you one! Maybe this is my lucky day, huh?

Diane: You disgust me! I hate you!

Sam: Are you as turned on as I am?

Sam: Now I’m going to nibble on your ear.

Diane: Don’t tell me you’re going to nibble on my ear…

We lost another iconic character of the ’80s. Harry Anderson, who was mainly known for playing Judge Harry Stone on Night Court, died in his home in Asheville, North Carolina yesterday.

Anderson, a fellow native Rhode Islander, got a huge break, with his recurring guest role, the hilarious con man Harry “The Hat” Gittes, on Cheers. That role led to him playing Judge Harry Stone on Night Court, from 1984-1992. Harry was just as zany and eccentric as the crazies who passed through his courtroom. And just like his character, Anderson was a magician at heart. And thanks to both Anderson, and his Night Court character, we all discovered the jazz great Mel Tormé. Anderson was nominated for three consecutive Emmys, from 1985 to 1987. In 1990, Harry played the adult Richie Tozier in the 1990 miniseries It, based on the Stephen King novel.

After Night Court’s run ended, Anderson went right back at it, playing Dave Barry on “Dave’s World,” which ran from 1993 to 1997. After that, he was not very active in the acting world anymore.

He is survived by his wife, Elizabeth Morgan, and he had two children from a previous marriage.

If, for some reason, you have never seen Night Court, I cannot recommend it enough. I have seen some episodes recently, and it is just as funny now, as it was back then.

Instead of a standard Quote of the Day, let’s check out the late, great Harry Anderson’s brilliance as Harry “The Hat” Gittes on Cheers:

Welcome to another episode of Return to the ’80s! This episode is the first in a series of television theme songs. Robert and Paul each pick 5 sitcom theme songs, and discuss them. A special thanks goes out to Return to the ’80s team member Sandy from Jersey for putting together these show notes. As usual, if you have any questions or comments about this episode, or anything ’80s, we would love to hear from you! Our next episode will be about Ghostbusters. Let us know if you’ve seen the new Ghostbusters movie. Also, Ghostbusters II gets trashed alot. Are there any fans if that sequel out there to defend this film? You can email us at returnto80s@gmail.com.

– Talks of Ghostbusters: new one being released on video

– Bon Jovi coming back out. Spoke about that. Played clip of “This House Is Not For Sale“. Has 1.7 mil hits on YouTube.

– Spoke of Robert being a guest on 80’s Reboot Overdrive podcast. And Paul was talked about on the podcast as well.

– Remember that Song – Tina Marie got the answer to the question, which was “The Way It Is“, sung by Bruce Hornsby.
– Plays song.
– Robert talks of how he saw him and Huey Lewis and the News in the same month
– Tim Cook also got song right.
– Reads note that Tim wrote.
– Robert gives a new Remember That Song. Can you name the artist and song:

Write in to returnto80s@gmail.com and put Remember That Song in the subject line to submit your answer.

“Who was the producers original choice to play Alex P. Keaton on Family Ties.?” Answer was Matthew Broderick which was answered by Tina Marie.
– Matthew had to decline role because his father became ill.
– New trivia- Which 2 songs in the U.S., that were sung in German, were #1 and #2 songs.

Write in to returnto80s@gmail.com and put Trivia in the subject line to submit your answer.

– Paul talks of old intro styles to TV shows and how he misses them, and misses opening credits.
– Covering sitcoms on this podcast, and the other categories will be split up.

Theme songs covered:
– ALF (great theme song)
– Growing Pains (a personal fave of mine) spoke of the show and how Leo and Matthew Perry were on it and how it was one of Paul’s favorite shows (mine too).
– Charles in Charge – Version 1 and Version 2
– Gimme a Break
– Head of the Class – Paul talks of when he was in the Navy and Khrystyne Haje and the Pointer Sisters came on his ship during the Gulf War.
– Cheers
– Fresh Prince of Bel Air
– My Two Dads (one of my favorites)
– Talks about Red Oaks – the show that is on Netflix [But Paul remembered after recording this, that it is actually on Amazon).
– Night Court (another great show)
– Diff’rent Strokes – talks about how a reunion can’t be because a lot of the characters have passed away.

In honor of John Ratzenberger’s 68th birthday, here are some Cliff Clavin quotes from Cheers:

Sam Malone: Come on, you guys, come on. We don’t have to bite each others’ heads off here.
Cliff Clavin: It may be the only thing we get to eat this day, Sammy.

Carla LeBec: I bet the only reason he married you was because he knocked you up.
Gloria LeBec: How do you know that?
Carla LeBec: Babe’s intuition.
Gloria LeBec: Yeah? Well, maybe that’s the same reason he married you.
Carla LeBec: Yeah, but with me, it wasn’t a cheap thrill. It was a very tender moment in the back of a Datsun hatchback.
Gloria LeBec: [raises her hand] Toyota Corolla. Front seat.
Cliff Clavin: All right ladies, ladies, let’s stop right now, huh? Uh, all this talk about conceiving your children in these cars. This makes me sick. Doesn’t anybody buy American anymore? 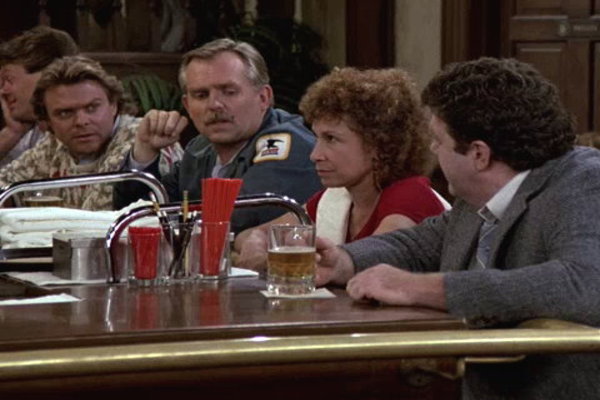 Cliff Clavin: Listen up everybody. Clifford Clavin has decided to make a major life change.
Carla LeBec: Don’t bother. You’d be a dorky woman too.

Question: Finish the slogan that was heard in the movie Airplane!: “WZAZ in Chicago, where…”

Last Question: According to the sign outside the bar, what year was Cheers established?

Although the sign stated that Cheers was established in 1895, it was really established in 1889. It was revealed in the 8th season episode, “The Stork Brings a Crane” that “Est. 1895” on the bar’s sign is a made-up date chosen by Carla for numerological purposes.

Well, I can’t mention Cheers without playing the theme song!

Question: According to the sign outside the bar, what year was Cheers established?

Last Questions: In Footloose, what kind of car did Ren drive. Also, what color was it?

Here is Ren picking Ariel up for the prom in the Bug:

And here is an iconic scene from the movie:

Question: What movie featured the characters Mac, Wiploc, and Zeebo?

Last Question: What was the name of the establishment that battled against the Cheers gang in several “Bar Wars”?

Just as Friends fans looked forward to the Thanksgiving episodes and The Simpsons fans anticipate the Haloween episodes, Cheers fans looked forward to the “Bar Wars” episodes where two Boston bars – Cheers and Gary’s Old Towne Tavern would have some kind of competition going on. The Cheers gang usually (and always hilariously) came up on the losing end. Even if they won the competition itself, they would always find a way to screw it up. Here is a list of the episodes:

#78 – From Beer to Eternity
In Cheers’ first athletic competition against Gary’s Olde Towne Tavern, Sam and pals learn that bowling is not right up their alley. That is, until they discover that Woody has a striking talent for the game, but he’s reluctant to play.

#189 – Bar Wars III: Return of Tecumseh
The gang goes at it again with Gary’s Old Towne Tavern when they notice Cheers’ wooden statue of Tecumseh is missing.

#196 – Cheers Fouls Out
Boston Celtic Kevin McHale agrees to be Cheers’ ringer in a basketball game against Gary’s Old Towne Tavern, but only if the winnings go to charity.

#228- Bar Wars V: Final Judgement
Sam’s spooked when it looks like the gang has given rival bar owner Gary the Halloween fright of his life — which may have scared him to death.

#244 – Bar Wars VI: This Time It’s For Real
The new owner of Gary’s Olde Towne Tavern is a real wise guy, who responds to Cheers’ welcoming prank with a well-organized crime that really blows the gang away.

#266 – Bar Wars VII: The Naked Prey
Sam may need the luck of the Irish — and the help of con man Harry the Hat (Harry Anderson) — to win a St. Patrick’s Day bet with Gary’s Old Towne Tavern.

Here are parts of a classic episode (#196 – Cheers Fouls Out ) – where the gang brought in Kevin McHale as a ringer for a basketball game against Gary’s: