Can you name the song and the artist who covered it in 1982: 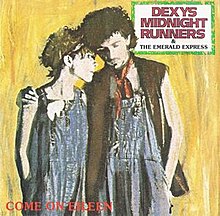 We end the One Hit Wonders mix tape with another international hit – it reached the top ten in no fewer than fifteen countries, including #1 on the AT40 in April of 1983. I will be the first (of what should be many) to admit that I really had no idea what the lyrics to this song were when I was a fourteen. I could understand the first line “Poor old Johnny Ray” (it was written on the video) and the chorus was rather intelligible, but the rest of the song remained a mystery as I sang nonsensical lyrics that sounded close to what I was hearing. Since the invention of the internet and all of this useless information at our fingertips, I have frequently searched for and found the elusive lyrics to this hit (in fact, I am looking at them right now). As the chorus suggests, the song is a plea – a plea for Eileen to “come on” and go along with the song’s speaker. He fully admits to being smitten with Eileen, emotionally, as well as physically, “You in that dress, my thoughts I confess / Verge on dirty.” He later implores her sense of youth and not settling for the mundane as most people do:

He begs and pleads – and we all hope, for him, that he is successful. The video suggests that they are. Despite lyrics that are nearly impossible to discern, this song endures. “Come on Eileen” can be frequently heard on any station that plays ‘80s music. VH1 recognizes the brilliance of this song by ranking it as the #1 greatest One Hit Wonder from the ‘80s – I can’t disagree.

There you have twenty shooting stars – songs that hit and then disappeared – bright lights that quickly faded. Some are still heard on stations that feature ‘80s music and some have been forgotten. Regardless of future successes, the songs by these artists touched us briefly and left an indelible mark on our hearts and ears. These songs may be in the discount bin now, but at one time they ruled the airwaves and I, for one, will never let them go.

Welcome back to this week’s Top 40 Countdown. If you missed the first 10 songs, you can go ahead and check them out. 1983 was an incredible year of music. The ’70s sound had pretty much disappeared, and ’80s music was building it’s own identity. At this time, I was 12 years old, and would become a teenager later in the year. I was wrapping up 7th grade, and getting ready for my final year of junior high. Now, let’s Return to the glorious week of May 28, 1983, and continue the countdown.

I did not know about INXS until later in the decade, when their Kick album came out. So I was unfamiliar with this song. It is classic INXS. I really like this one a lot. It may be 1983, but this sounds like it could have been from their incredible 1987 album.

Ahhh, the smooth sound of Al Jarreau! This definitely would not have been on my radar in 1983. But, I like it a lot now. This came off of Al Jarreau’s #1 Jazz album, Jarreau. This song was written by David Foster and Jay Graydon. It was originally supposed to be an instrumental that was to appear on David Foster’s 1983 album, The Best of Me. Jay Graydon produced many of Al Jarreau’s songs, so they gave the song to him.

This was my introduction to Elton John. Thank you MTV! I tend to favor Elton John’s ’70s songs over his ’80s songs, but I love this one. It’s so upbeat and fun.

I believe this R&B ballad has been on one of my countdowns before. I still like it. This is another one that would not have been on my radar back then, but I like it a lot now.

You know it. You love it. This is ’80s personified! This was Kajagoogoo’s only hit in the U.S., but they did have some other hits in the U.K.

There is no mistaking which decade this song is from! This was one of the biggest hits of 1983. The song’s lyrics refer to the 1981 Brixton riot, the title referring to Electric Avenue, a market street in the Brixton area of London.

Although I am a rocker at heart, I really love a lot of soft rock from the early ’80s. And this is one of the best. Sérgio Mendes is a bandleader, and does not sing in this one. That credit goes to Joe Pizzulo and Leza Miller.

23. “Stranger In My House” by Ronnie Milsap

Kenny Rogers may have been the king of country cross-over music in the ’70s and ’80s, but Ronnie Milsap is no slouch either. This particular song peaked at #5 on the Country charts, #8 on the Adult Contemporary charts, and right here at #23 on the Hot 100.

I love this song, even though I can’t understand the lyrics, other than the title. This falls in the same category as “Louie, Louie” by The Kingsmen and “In-A-Gadda-Da-Vida” by Iron Butterfly. This is great music, which is a lot of fun.

Another ultimate ’80s song, by an ultimate ’80s band. Duran Duran was on top of the world at this time. And with songs like this, we can see why. Girls today have their One Direction. The girls of our generation had Duran Duran. Almost 35 years later, they are still going strong, having released a new album this past September, Paper Gods. And I think they sound the same today as they did in our glorious ’80s.

Well, classic Duran Duran is a good way to wrap up the countdown for today. Are you liking this countdown so far? And as the numbers get smaller, the hits get bigger. So, come on back tomorrow to check out the next 10 songs of the countdown. Dexys Midnight Runners was a British group founded by Kevin Rowland and Kevin “Al” Archer. They named the band after the drug Dexedrine, and “midnight runners” referred to the energy the Dexedrine gave, enabling one to dance all night. Am I the only one who thought that the lead singer was named Dexy and the Midight Runners were the band playing behind him? Ah, the innocence of youth! In 1980, they had a hit in the U.K. with the #1 song “Geno”. But, it wasn’t until 1982 that the band hit it big in the U.S. with “Come On Eileen”. It was the biggest-selling single of 1982, and peaked at #1 on April 23, 1983. It would turn out to be their only U.S. hit.
The band took a two year break, and came back in 1985 with the album Don’t Stand Me Down. It was a flop, and they disbanded the following year after a brief return to the U.K. charts with the single “Because Of You” (which was used as the theme tune to a British sitcom, Brush Strokes).

In April 2003, a new incarnation of the group announced that they would be embarking on a tour. A greatest hits album, Let’s Make This Precious, was released in September 2003, and a successful tour took place in October and November. Two newly recorded songs, “Manhood” and “My Life in England,” appeared on the album and were touted as new singles. Despite airplay on national radio, neither was officially released as a commercial single.
In 2008, Kevin Rowland gave an interview to Uncut magazine about work on the new Dexys album.

While we hold our breathe wating for that new album, here is their hit, “Come On Eileen”: