Last Song: “She’s Like The Wind” by Patrick Swayze from Dirty Dancing: Original Soundtrack from the Vestron Motion Picture (1988)

Question: Which 1981 video game has the same name as a Shakespearean play?

Last Question: What is the real name of Baby in ‘Dirty Dancing’? 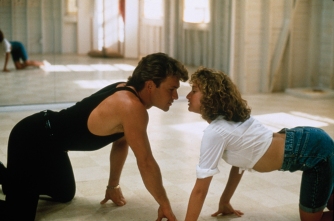 Question: What Company produced their first portable CD player in 1982?

Last Question: In the film Dirty Dancing, what song is the last dance performed to?

Answer: “(I’ve Had) The Time of My Life” by Bill Medley and Jennifer Warnes

Johnny: Sorry for the interruption, folks, but I always do the last dance of the season. This year somebody told me not to. So I’m gonna do my kind of dancin’ with a great partner, who’s not only a terrific dancer, but somebody… who’s taught me… that there are people willing to stand up for other people no matter what it costs them. Somebody who’s taught me about the kind of person I wanna be. Miss Frances Houseman.

Nobody puts Baby in a corner

If you’d like to buy, watch, or rent this movie from Amazon, click on the movie poster below: 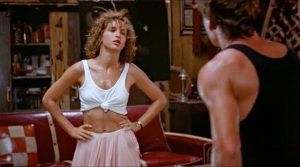 The Return to the ’80s Podcast is back! We return in a big way, talking about one of the most iconic ’80s movies. Robert and Paul are joined once again by Marissa (who last appeared on the ’80s Crushes episode). So come cut loose with Return to the ’80s, where dancing IS allowed, and join in on the discussion of this classic movie, and enjoy some great music along the way!

– Danger Zone! Are we going to see an oiled up Val Kilmer? Top Gun sequel in the works.

Play This, Not That

Instead of “Danger Zone

Remember That Song
We’ve always had time on our sides
But now it’s fading fast
Every second
Every moment
We’ve got to, we’ve gotta make it last

On the show thirtysomething, what was the name of the company Michael and Elliot owned in the first season?

– The dancing feet in the opening credit sequence contained many of the cast and crew. Over 150 different pairs of feet were shot. The dancer with the gold shoes was actually Kenny Loggins.

– The scenes where Chris Penn learns to dance were purposely added to the script because he really didn’t know how to dance!

– With the Principal’s knowledge, 24-year-old Kevin Bacon attended the Payson Utah High School as “Ren McCormack”, a transfer student from Philadelphia to get into his role. With his narrow tie and new-wave haircut, he was treated pretty much like in the film. Bacon gratefully left with the location scouts on the afternoon of the first day.

– Opening scene
– Was that kid really sleeping? Reverend Shaw’s sermon
– Psycho? Rebel? You be the judge, while listening to Sammy Hagar’s “The Girl Gets Around”
– What does Robert, who is an English teacher, think of book burning. We’ll give you 1 guess
– “Do you read much?” – Slaughterhouse Five discussion
– Drive-in diner dancing scene Dancing in the Sheets by Shalamar
– Ren pulls into school blaring Metal Health
– They sell men’s clothes where you got that? Ren meets Willard
– We find out dancing is banned
– Ren gets pulled over
– Ariel wants to go to college and get out of that town – “Somebody’s Eyes” by Karla Bonof
– Awesome tractor chicken scene – Holding Out for a Hero by Bonnie Tyler
– Angry dance – Never by Moving Pictures
– Dancing in Bomont is illegal. Underage drinking? Perfectly acceptable
– Look out Moving Pictures! Marissa and Robert perform “What About Me” for the first installment of Return to the ’80s Karaoke
– Ren and Ariel – train scene
– The gyrating in the seats from listening to music caused the car accident that killed Ariel’s brother. ALCOHOL HAD NOTHING TO DO WITH IT!
– Willard can’t dance
– Creepy dude tries picking up high school student, Rusty
– ’80s Movie + Bar Scene = FIGHT!!!
– Shaw and Vi at church – You can lift a congregation up so high they have to look down to see heaven. But it’s the one to one where you need a little work.
– MONTAGE!!!!!! Let’s Hear It For the Boy by Deniece Williams
– Ren teaches Willard how to dance. In every possible place where they can be seen. In a town that does not allow dancing.
– “You’re so stupid!” – Cranston gives Ariel a beatdown
– Ariel gives Ren a bible with verses highlighted for him to use at the town council meeting
– They had it coming! Somebody throws a brick through the window of Ren’s little cousins who helped him teach Willard how to dance
– Town council scene
– There’s nothing like a good ole fashioned book burnin’!
– MONTAGE #2! Setup for the dance – ” I’m Free (Heaven Helps the Man)” by Kenny Loggins
– Pick a winner! The dance begins – kinda. “Almost Paradise” by Mike Reno and Ann Wilson
– Ninja Ren. The climactic fight scene
– Everybody cuts loose!
– Why?!?!? Footloose remake. Well, it’s not as horrible as the Dirty Dancing remake, so there’s that.

Other friends of the podcast:
Doug McCoy of McCoycast – https://mccoycast.wordpress.com/
Scott Ryan of 30somethingpod– you can purchase Scott’s new book thirtysomething at 30:

Johnny: Sorry for the interruption, folks, but I always do the last dance of the season. This year somebody told me not to. So I’m gonna do my kind of dancin’ with a great partner, who’s not only a terrific dancer, but somebody… who’s taught me… that there are people willing to stand up for other people no matter what it costs them. Somebody who’s taught me about the kind of person I wanna be. Miss Frances Houseman.

Last Song: “She’s Like the Wind” by Patrick Swayze from the Dirty Dancing Soundtrack (1987)