That’s when she told me a story, ’bout free milk and a cow
And said no hug-ee no kiss-ee until I get a weddin’ vow

Keep Your Hands to Yourself by The Georgia Satellites 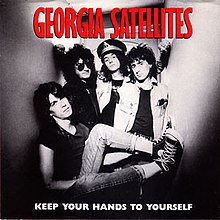 I definitely have a liking for Southern rock. Thirty-Eight Special is one of my favorite bands as well as one of the best concerts I have ever been to. The Georgia Satellites have more of country sound in vocalist Dan Baird, but the music rocks. This song, released in 1986, reached #2 on the AT 40 and is instantly recognizable, remaining one of the more popular One Hit Wonders to come out of the ‘80s. No complex lyrics here- just a guy who wants a girl, but she is insisting on marriage first. Excellent guitar work accompanies somewhat tongue-in-cheek lyrics like:

B-B-B-baby baby baby why you want treat me this way
You know I’m still your lover boy I still feel the same way
That’s when she told me a story, ’bout free milk and a cow
And said no hug-ee no kiss-ee until I get a wedding vow
My honey my baby, don’t put my love upon no shelf
She said don’t hand me no lines and keep your hands to yourself

I think this is one of the more ‘fun’ songs from the ‘80s. It sure seemed like the Georgia Satellites had what it took to be band that would be around for a while, but it was not meant to be. Dan Baird would later hit the charts with the equally fun song “I Love you Period”, and while the band is still performing, they have undergone major lineup changes with guitarist Rick Richards being the only original member remaining.

You know I’m still your loverboy, I still feel the same way
That’s when she told me a story ’bout free milk and a cow

“Keep Your Hands to Yourself” by Georgia Satellites

“Keep Your Hands to Yourself” was a very distinctive and very polarizing Southern Rock smash hit for The Georgia Satellites. The song was in heavy rotation on MTV, and on the radio. They guitar riff, and Dan Baird’s unique vocals made the song very popular. People tended to hate this song, or love it. It peaked at #2 on February 21, 1987. It was kept out of the #1 spot by Bon Jovi’s “Livin’ on a Prayer”.

Georgia Satellites followed up with some more songs and albums that received good reviews, but did not do well commercially. Baird left the band in 1990 to pursue a solo career. Georgia Satellites returned in 1993, without Dan Baird. Led by original band members Rick Richards (lead guitar and vocals) and Rick Price (bass and vocals), with Kenny Head on keyboards and Todd Johnston on drums, they continue to perform.

You can see the top 100 hits from Billboard that year.

I had a lot of great music memories from this year. But, there were also so many bad songs, that I couldn’t just whittle it down to 5 like I have done for all my other Horrible lists. So here are my 10 Horrible Hits of 1987:

10. Everybody Have Fun Tonight – Wang Chung

The very first time I heard this song was at a dance/mixer. I got there early to set up, and the DJ played this song first, before the rest of the people showed up. I thought it sounded pretty good when it was being blasted on the big speakers. But upon further listening on normal radio, it slowly drove me crazy. “Everybody Have Fun Tonight! Everybody Wang Chung tonight?” Really?!? It seemed a bit desperate (or arrogant) to try to make their band name a part of our vocabulary. Well, it didn’t work, and they didn’t have too many hits after this song.

9. I Want Your Sex – George Michael

I was really sick of George Michael by the time this came out. The only song I really liked by him was “Faith”. Remember when this song was the most controversial thing that George Michael did? We all long for those days again!

I love Lionel. But after an extremely long sting of successful hits, this stinker was kind of a jump-the-shark moment for him in my eyes. I even liked “Hello” better than this. I couldn’t listen to the whole song back then, and I can’t do it now.

7. Shake You Down – Gregory Abbott

This was kind of boring for a dance song. I’ll take anything by Janet Jackson over this any day!

5. Hip to Be Square – Huey Lewis and the News

I don’t know why, but this song just rubs me the wrong way.

Bruce Hornsby has a unique sound on his piano. Unfortunately, every song I’ve heard by him sounds exactly the same. And they are all horrible. I can’t turn this song off fast enough as soon as I hear it.

I love Madonna’s early music, and I even liked her music through the ’90s. But, this crappy boring song was the valley between her coned mountains of hits.

2. The Lady In Red – Chris DeBurgh

Let me know if there is anybody out there that hasn’t danced with a girl/woman in a red dress that actually still likes this song. This is too boring and whiny for me. I don’t care much for male singers that have wussy voices. However, I must admit that I do like DeBurgh’s “Carry Me (Like a Fire in Your Heart)“.

This was the death of the sax in pop/rock songs, until Lady Ga Ga and the late, great Clarence Clemons brought it back last month. I don’t like the thought of elevator music appearing in the top 100, never mind topping at #4! I have a suggestion if you are planning a wedding. Do as I did, and tell the DJ: “NO KENNY G!!!”

“You Give Love a Bad Name” sent Bon Jovi into the stratosphere, and their follow-up song. “Livin’ on a Prayer” kept them there. I get sick of hearing the same song over and over again, but I could not get enough of this song when it came out. It was inspiring hearing about Tommy and Gina, who would go on to reappear in Bon Jovi’s 2000 smash hit “It’s My Life”.

9. Somewhere Out There – Linda Ronstadt and James Ingram

This is a guilty pleasure for me. But Linda Ronstadt has an incredible voice, and James Ingram is so smooth. Together, they sounded great.

8. Keep Your Hands to Yourself – Georgia Satellites

Georgia Satellites were a one-hit wonder with this song. I think this song might irritate some people, but I really like it. It’s a great Southern Rock song that makes you want to move to the beat.

This is one of my favorite Huey Lewis songs, if not my favorite. Unfortunately, this song was overshadowed by the other songs from the Fore! album, such as “Stuck With You”, “Doing It All for My Baby”, and “Hip to Be Square”. This song was actually written by Bruce Hornsby and his brother John Hornsby. If Hornsby did this song instead of Huey Lewis, I would either hate this song, or I would like Bruce Hornsby.

6. At This Moment – Billy Vera and The Beaters

Kenny Loggins may be the king of ’80s movie soundtracks, but Bob Seger made a pretty good mark on movie soundtracks himself. He scored big time with “Old Time Rock and Roll” in an iconic scene in Risky Business. Then he had “Shakedown” for the Beverly Hills Cop II. I like Bob Seger alot, and this is one of my favorite songs by him.

In my opinion, Ann and Nancy Wilson are among the greatest females in Rock history. This is one of my favorite Heart songs. Ann sings this song with so much power and passion.

U2 had some great rockin’ songs that I love. But this slower song is probably my favorite U2 tune. I love songs that starts slow, and becomes more and more powerful as it goes on.

Chicago, one of my favorite bands, proved that they could move on without Peter Cetera. Their rock songs are underrated. But, when they do great ballads like this, you can see why these are the ones that get the radio air play.

This is a great song without the video. But, much like “At This Moment” is linked with Family Ties, “Here I Go Again” will forever be linked with the video and Tawny Kitaen. How many of us guys wished that we were that car?!? 24 years later I still love this song. It stands the test of time for me.