Exec #1 (Graham Chapman): Item six on the agenda: “The Meaning of Life” Now uh, Harry, you’ve had some thoughts on this.

Exec #2 (Michael Palin): Yeah, I’ve had a team working on this over the past few weeks, and what we’ve come up with can be reduced to two fundamental concepts. One: People aren’t wearing enough hats. Two: Matter is energy. In the universe there are many energy fields which we cannot normally perceive. Some energies have a spiritual source which act upon a person’s soul. However, this “soul” does not exist ab initio as orthodox Christianity teaches; it has to be brought into existence by a process of guided self-observation. However, this is rarely achieved owing to man’s unique ability to be distracted from spiritual matters by everyday trivia.

Exec #3 (Terry Jones): What was that about hats again?

Exec #4: Certainly. Hat sales have increased but not pari passu, as our research…

Exec #3: [Interrupting] “Not wearing enough”? enough for what purpose?

Exec #5 (Eric Idle): Can I just ask, with reference to your second point, when you say souls don’t develop because people become distracted…

Exec #5: Has anyone noticed that building there before? 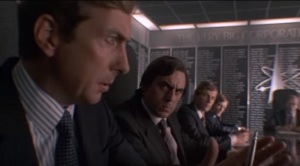