Question: Name the 1980 film based on the life of John Merrick.

Bonus: Which album is the song from?

Answer: “Nasty” by Janet Jackson from the album Control 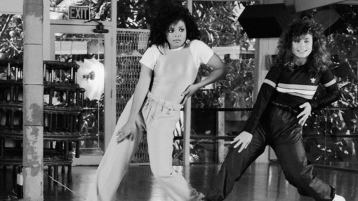 Take a chance
Leave everything behind you
Come and join me, won’t be sorry
It’s easy to survive

Last Song: “Straight Up” by Paula Abdul from Forever Your Girl (1989)

Last Song: “Cold Hearted” by Paula Abdul from the album Forever Your Girl (1989)

Welcome back to the conclusion of this week’s countdown! If you’d like to go back too check out the previous songs, you can check out songs 40-31, 30-21, and 20-11. It has been fun going back to this transitional part of my life. We may have been heading into the ’90s, but there are definitely some classic ’80s songs here. So, let’s Return to the week ending February 11, 1989, and wrap up this week’s countdown.

10. “Walking Away” by Information Society

9. “She Wants to Dance With Me” by Rick Astley

Yes, Rick Astley had other songs besides “Never Gonna Give You Up” and “Together Forever”. Somebody better inform the ’80s radio stations and shows that are out there.

8. “I Wanna Have Some Fun” by Samantha Fox

My second ’80s crush of this countdown! This was the first song released from Samantha’s third album, I Wanna Have Some Fun. I always loved her music. And 16-18 year old me really appreciated that every one of her songs at that time were about sex or love…but mostly sex. Pretty much the pop version of the band Kiss.

7. “The Lover in Me” by Sheena Easton

This was one of Sheena Easton’s biggest hits in the U.S., peaking at #2. After having a strong run throughout the early ’80s, this would be her final Top 10 hit. This song was written by Kenneth “Babyface” Edmonds, Antonio “L.A.” Reid and Daryl Simmons, who were quite the powerhouse at that time.

This awesome ballad would be Tiffany’s final Top 10 hit. I personally think she is very underrated. She has a very cool and unique voice, and puts a lot of emotion into her songs. And she is another ’80s artist who is still out there recording new music….most recently, 2018’s Pieces of Me.

5. “When the Children Cry” by White Lion

Speaking of unique voices, here is another awesome power ballad. White Lion had a really good run in the late ’80s/early ’90s before they called it quits.

2-3-4!!! Bon Jovi was not slowing down one bit at this time. This was the 2nd single released from the New Jersey album, and was the 2nd of 5 Top 10 songs from that album alone. That was the most top 10 hits for any hard rock album.

Thanks Wikipedia for letting us know that the title is a reference to the phrase “doin’ the wild thing,” a euphemism for sex. Duh!!!! This song would peak at #2. It is a lot of fun. I do like rap with guitar and heavy drums. As usual, if a rap song has a great rock sound to it, that means it was stolen. In this case, it used an uncredited sample of Van Halen’s “Jamie’s Cryin'”. There was a lawsuit that was settled out of court.

Great power ballad by the Canadian rock group, Sheriff. This song was released in 1983 with minor success. Then in November 1988, Brian Philips, Program Director at KDWB in Minneapolis, and WKTI in Milwaukee began playing the song, and eventually other radio stations nationally followed suit. The song shot up to number 1, which was four years after the band separated in 1985. Freddy Curci held the final note of the song for 19.4 seconds, making it the longest-held note for a male pop singer. Curci went on to form the supergroup Alias, and is still with them to this day.

1. “Straight Up” by Paula Abdul

This was the third song released from Paula Abdul’s Forever Your Girl album (after “Knocked Out” and “The Way That You Love Me”), but this is the one that shot her up to superstardom. This was the first week the song topped the charts, and would stay here for 3 weeks. She had a long string of hits in a short time after this. And the former Laker Girl already had a huge career as a choreographer in many, many music videos and blockbuster movies.

Well, that wraps up this week’s countdown. I hope you enjoyed it as much as I have. We’ll be heading back to the U.K. next time. Until then, Keep your feet on the ground, and keep reaching for the stars.

” by Paula Abdul from the album Forever Your Girl

Hi Everybody! Welcome back to this week’s countdown! At this point in time, we were getting away from that classic early to mid-’80s sound. It is kind of sad as we begin to move out of the ’80s. But, I did love the huge range of musical styles. For example, yesterday we had Metallica and Enya on the same list! Today also has a mix of rock acts and pop acts.
There are going to be a couple of different things about today’s list. For each song, I will include an Amazon link to the song. Then you can download it, and put it on your iPod, MP3 player, whatever listening device you use. Don’t worry though. You can still click on the song title to listen/watch the YouTube video of the song.
The second change is that I am going to throw an older song into this list. I listen to Casey Kasem’s American Top 40 station on iHeartRadio whenever I get a chance. I noticed that he often plays an older song in addition to the Long Distance Dedication. So I will do the same thing here.
Now, let’s Return to the week ending March 25, 1989, and continue the countdown.

I had heard this song before. But, I had no idea that Animotion (best known for their smash hit, “Obsession“) was the band who performed this. It has that distinctive late-’80s sound. This song was also featured in the 1988 movie, My Stepmother Is an Alien, starring Dan Aykroyd and Kim Basinger.

“Room to Move” by Animotion on Amazon

29. “Surrender to Me” by Ann Wilson and Robin Zander

This is one of my favorite duets of all-time. I bought the 45 of this song before I joined the Navy. You can’t go wrong with Ann Wilson lead singer of Heart, who I think has one of the best rock voices ever. She sounded really good with Robin Zander, the lead singer of Cheap Trick. It also doesn’t hurt that Richard Marx was one of the songwriters here, as he was at the top of his game. This song was also featured in a 1988 movie. This one was for Tequila Sunrise starring Mel Gibson, Michelle Pfeiffer and Kurt Russell.

“Surrender to Me” by Ann Wilson and Robin Zander on Amazon

.38 Special is mainly known for their upbeat rock songs. However, this awesome ballad would be the band’s biggest hit, peaking at #6. It also peaked at #2 on the Mainstream Rock chart, and became the band’s first #1 single on the Adult Contemporary chart.

“Second Chance” by .38 Special on Amazon

This is one of the biggest power ballads of all-time. Bon Jovi was in the peak of their incredible run at this point, and this song shot right up to #1. I still love this song. Richie Sambora’s backing vocals are just incredible. And it feels like Jon is putting everything he has into this song – Especially, at the part where he screams after the lyrics I didn’t mean to miss your birthday, baby/I wish I’d seen you blow those candles out. So, so great!

“I’ll Be There For You” by Bon Jovi on Amazon

He’s back. Yesterday, we hit Tone Lōc’s “Wild Thing”. Now here is his other song. This song does sound like “Wild Thing” to me, but I still like it.

This is one of my favorite Madonna songs. It was the first song released off of the album of the same name. I think that Like a Prayer was Madonna’s last solid album. I would not hear this title track until I got to San Diego a month later. I instantly loved this song, and still love it today.

I love this song by Deon Estus! Deon was the bass player in Wham!, and was the bassist on George Michael’s first two solo albums. And how’s this for a resume? Deon has played with Marvin Gaye, Tina Turner, Frank Zappa, George Clinton, Annie Lennox, Edgar Winter, Aaron Neville, and Elton John. This song was his biggest hit, peaking all the way up at #5. George Michael sang the backing vocals here.

“Heaven Help Me” by Deon Estus on Amazon

“Our Day Will Come” by Ruby and the Romantics

This countdown took place 26 years ago this week. Now that we have Returned to 1989, let’s go back another 26 years – to 1963. This week in 1963, unless you saw them in a club in Hamburg Germany, chances are that you have never heard of the Beatles yet. Before the music landscape changed forever, let’s take a look at what was at the top of the charts this week in 1963.
It was Ruby and the Romantics. Their song “Our Day Will Come” was their first mainstream hit, and it topped the charts. They didn’t go on to be anywhere near as successful.

“Our Day Will Come” by Ruby and the Romantics on Amazon

Yeah, yeah, I know. Now a lot of you want to go back to 1963 again! But, this was a huge hit, and put Paula Abdul on the map. I know I loved this song when it came out. I don’t love it so much now, but it’s still not bad to hear once in a while.

“Straight Up” by Paula Abdul on Amazon

I love Vixen! I could not get enough of this all-female hard rock group. They are mainly known for this song and “Edge of a Broken Heart“. But, I loved every song on their first two albums. And I still love them today.

“Cryin'” by Vixen on Amazon

I was unfamiliar with this hit from the “Toy Soldiers” singer, Martika. Martika rose to prominence by starring in the musical television show, Kids Incorporated, which also launched the careers of Stacy Ferguson (aka Fergie) and Jennifer Love Hewitt. Martika was a stand-out on that show. I love her voice. I don’t know why, but even though I was really into rock (and still am), I loved this freestyle pop sound of the very late ’80s.

“More Than You Know” by Martika on Amazon

I hope you are all enjoying this trip back to 1989. At least this gives you something else to listen to instead of Taylor Swift.
Tomorrow is going to be an even bigger range of musical styles than it was today. And tomorrow, we will have the return of the Long Distance Dedication!!! So come back tomorrow, and check it out!