You can follow ’80s Radical Sabbatical at https://80sradsab.com/ as well as on the following social media accounts:

And you can follow Return to the 80s at:

Dr. Michael Hfuhruhurr: [Dr. Hfuhruhurr has driven them to his house, where Ramon and the housekeeper are on the porch, smiling happily to welcome the bride] There it is, darling. Your new home. The House of Hfuhruhurr.

Dolores: What are those assholes doing on the porch?

Neal: Del… Why did you kiss my ear?
Del: Why are you holding my hand? 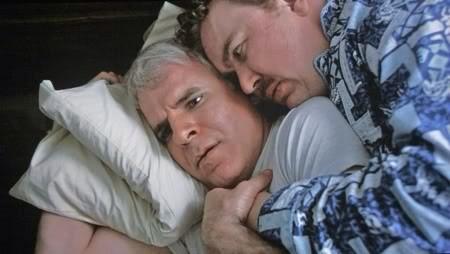 Neal: [frowns] Where’s your other hand?
Del: Between two pillows…
Neal: Those aren’t pillows!
[they both leap out of bed, screaming and shaking their hands in disgust]

Synopsis: Two con men try to settle their rivalry by betting on who can swindle a young American heiress out of $50,000 first. – imdb

Last time I had seen this? Never

What I knew about this movie before watching it Very little. All I knew was that Steve Martin and Michael Caine were dirty, rotten scoundrels. And I remember the commercial where they were sitting at a dinner table, and Steve Martin (wearing an eye patch) said, “Excuse me. May I go to the bathroom first?” Michael Caine said “OK”. Then Steve Martin appeared to be relieving himself as he was sitting there, and then said, “Thank you.”

Review/Summary: Michael Caine plays Lawrence Jamieson, a suave con man living in the French Riviera. He seduces wealthy and morally suspect women, and steals money from them. Now he is concerned about a fellow con artist, known only as “The Jackal”, who is stepping on his territory by also stealing from wealthy victims.

Lawrence believes he has found the Jackal as he sees Steve Martin’s  Freddy Benson pulling a con. Lawrence decides to get rid of the competition by having Freddy arrested, and put on a plane to get him out of town for good. But, Freddy meets one of Lawrence’s marks, and figures out that Lawrence is a con artist as well. So, Freddy goes back, and forces Lawrence to take him on as a pupil in exchange for his silence.

Together, they run a string of cons, where Lawrence gets money from rich women, then brings in Freddy, posing as Lawrence’s mentally challenged, and socially inept brother, Ruprecht. This chases the women off, leaving Lawrence with the money.  Eventually

Freddy had enough of being the subordinate in these scams, so he decided to go off on his own. But once again, Lawrence did not want the competition around.

So the two came up with a bet, where the loser would leave for good.  The challenge was that they would select a mark, and the first one to get $50,000 from them would be the winner. They select a naive American heiress named Janet Colgate (Glenne Headly).

Freddy poses as a psychosomatic crippled U.S. Army soldier (unable to walk after seeing his wife cheat on him with Dance U.S.A. host Deney Terrio) who needs to borrow $50,000 for treatment by an elite psychiatrist, Dr. Emil Shaffhausen. Lawrence discovers Freddy’s plan, so he pretends to be Dr. Emil Shaffhausen – the person who is supposed to receive the $50,000. Shenanigans ensue, with Lawrence and Freddy continuously sabotaging each other.

Lawrence finds out that Janet really is not wealthy, but is just a contest winner. She was going to liquidate all her savings and borrow money to pay the $50,000, out of the kindness of her heart. Lawrence is touched, and no longer wants to go through with the bet. Instead, Lawrence and Freddy decide to change the bet so that the winner is the first one to have sex with Janet. Shenanigans ensue again.

I’m not going to spoil anything, but there is a plot twist that is totally awesome, and that’s all I’m going to say about that.

Well, I’ve been finding good movies to review! This was another great one! Both Steve Martin and Michael Caine were incredible. And Glenne Headly was very likeable as Janet. The schemes were a lot of fun. And there was a ton of classic Steve Martin physical humor. The movie also moved pretty quickly.

Does the movie stand the test of time? Absolutely 100%. The humor is timeless, and was visually pleasing. There was nothing outdated in this movie. It could have been released in the ’70s, ’80s, ’90s, or even currently, and it would be equally good in any of these decades.

Worth the Return? Definitely! I might not go out of my way to watch it, but if I happen to see that it’s on, I would definitely check in and watch it.

How many of you have see this before? What are your thoughts? Do you have any favorite quotes?