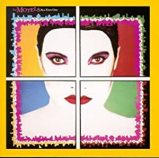 In honor of the 40th anniversary of The Motels’ fantastic album, All Four One, today’s Song of the Day is “Only the Lonely”. The album, released on April 6, 1982, featured this Top 10 hit, and the follow-up hit single, “Take the L“. “Only the Lonely” number 9 on July 17, 1982 where it spent four weeks in that position. The video earned the award “Best Performance in a Music Video” at the American Music Awards.

According to Songfacts, The Motels spent the late ’70s making a name for themselves in the Los Angeles music scene, and their first two albums, released in 1979 and 1980, met with critical acclaim and cracked the charts in America and Australia. All Four One was their third album, and it contained their breakthrough hit “Only the Lonely,” which was written by their lead singer Martha Davis. She explained the song in an interview with Beyond Race magazine. Said Davis: “‘Only the Lonely’ was one of those songs that was sitting on my guitar waiting for me. It literally wrote itself. It’s a song about empty success. It came about while the Motels were experiencing critical acclaim, traveling the world, riding in limos, and yet I was probably as sad as I had ever been. I was in a horrible relationship and had not yet recovered from my parents’ death (I doubt one ever does). The contradiction of these two worlds was where “Only the Lonely” lived… bittersweet.”

Last Song: “Only the Lonely” by The Motels from the album All Four One (1982)

Who do you want?
Who you be today?
And who is it really
Makin’ up your mind?

Last Song: “Only The Lonely” by The Motels from the album All Four One (1982)

So come on! Let’s get loose
Don’t hold back
‘Cause ain’t no use

Last Song: “Suddenly Last Summer” by The Motels from the album Little Robbers (1983)

A place for a moment, an end to dream
Forever I loved you, forever it seemed

Today, Robert wraps up his series on great songs that feature a saxophone. What are some of your favorites? Please leave a comment below. To kick off the conclusion of this week’s series, here is the legendary, late Clarence “Big Man” Clemons:

Now, take it away, Robert!

“Only the Lonely” by The Motels

As much as I love ‘80s music there were a few bands that barely registered in my collection. The Motels are one of this bands; I did have copies on a mixtape of this song, but I have never purchased an entire album by them. This song come from their most successful album, 1982’s All Four One, and reached #9 on the AT 40. The vocalist, Martha Davis, is well known to ‘80s fans, but the rest of the band toiled in relative obscurity as far as name recognition goes. The subdued sound that this band creates in this song is memorizing with the sax being played by Marty Jourard who is also the band’s keyboardist. Once again, here is a song that has great phrasing. The verses follow a simple pattern – the first two lines of each verse has a pause after two words and then continues. The third line is a longer one that has no pause. They are, in essence creating a music with words. It goes like this, “We walk (pause) the loneliest mile / We smile (pause) without any style / We kiss all together wrong no intention.” Here we have another song about the end of a relationship, this time though, I think the music first perfectly.

Here we have the first hit single from the Australian band that took the American music charts by storm in the early ‘80s and, honestly, sort of just faded away. This song comes from their first album Business as Usual and it hit #1 on the AT 40 in October of 1982. Men at Work feature the quirky vocals of Colin Hay who is clearly an icon of early ‘80s music as well as being in constant rotation on MTV. The saxophone is being played by Greg Ham who also doubles as the keyboard player. The sax is not limited to just a solo here, though. It establishes the song’s theme and has the sound that makes the song instantly recognizable. The song captures something we have all felt, thought, or said out loud at one time or another: “Just leave me alone!” After several pleas for solitude, Hay reveals a possible reason that he is being bothered, “Is that the man come to take me away? / Why do they follow me? / It’s not the future that I can see / It’s just my fantasy.” Is there a good reason for him to be taken away? I’m not sure, but I am sure that the success Men at Work had with their first two albums is well deserved. Their unique, fun style is something that we are missing today. I wish all of them were still around and making this intriguing music like this.

Many ‘80s pundits consider 1987 as the end of the true sound of ‘80s music. Maybe. I tend to extend my definition of ‘80s through 1987 with a few good tunes from 1988 when the changes in musical styles are very apparent and the ‘80s’ sound seems to get lost. One major reason I consider 1987 as a vital part of ‘80s lore is that I graduated high school in 1987 and the rise of Richard Marx. Richard Marx’s debut album was released in the Spring of 1987 about the time I graduated; it was the first album I bought after starting college. This song, the third single released from Richard Marx, was on the charts in early 1988 and reached #2. The sax is played by David Boruff and is full of the emotional sadness that the lyrics capture. This sad, sultry ballad is about an intense summer love that is no more. The speaker is lamenting what has been lost, “Summer came and left without a warning / All at once I looked and you were gone / And now you’re looking back at me / Searching for a way that we can be like we were before.” He is just not the same without her and improving the situation does not look like a possibility. He is stuck in the memories of that summer and cannot find a way to break free of them. The chorus captures this perfectly, “I remember how you loved me / Time was all we had until the day we said goodbye / I remember every moment of the endless summer nights.” We tend to take the time we have with others for granted and when the time is over we realize that we cannot get it back – it is gone forever.

“Do You Believe in Love” by Huey Lewis and the News

I saw Huey Lewis and the News in concert in Frankfurt, Germany in November 1986. The tour was in support of their Fore! album, which I liked, but the most memorable songs were “The Heart of Rock & Rolll”, “Walking on a Thin Line”, and this early hit. This song was released in 1982 and reached #7 on the charts. The first time I heard this song I was immediately drawn in by the harmonious background vocals- I thought (and still do) they sounded so cool. The band’s saxophonist is Johnny Colla, although they typically include an entire horn sections on tour in the ‘80s called The Tower of Power horns. The song is not complex – just a lonely man looking for a woman, “I was walking down a one way street / Just a looking for someone to meet / One woman who was looking for a man.” No hidden meanings here, just a plain old love story.

“You Belong to the City” by Glenn Frey

It seems fitting to end this list with another song from the artist who inspired it. This 1985 release was written specifically for the television show Miami Vice. It helped the soundtrack album reach #1, but the song itself climbed to #2, being kept out of the top spot by Starship’s “We Built this City.” The video itself is clearly influenced by the television show; it features Frey walking through a city at night wearing a Sonny Crockett type suit. The unforgettable sax that begins the song is being played by Bill Bergman. Lyrically the song is about someone who seems to be running away from something and has come to “the city” to escape the past, “You were on the run trying to get away from the things you’ve done.” Unfortunately a sense of boredom has set in, “The moon comes up and the music calls / You’re getting tired of staring at the same four walls.” Clearly a change was desired, but in a sense of frustration, “So much has happened, but nothing has changed.” This is one of Frey’s most successful and well known solo hits a perfect way to close my favorite ‘80s hits that feature a prevalent sax sound.

I am well aware that I have most likely left some great sax work in some big songs. It is difficult to include all of them, for instance “Take Me Home Tonight” by Eddie Money. It made the first draft of my list, but ultimately, I thought these others were stronger so I left it off. Please do not be offended if I left off your favorite. There were many more sax songs in the ‘80s than I remembered at first. As I kept digging, I found more and more.

The inspiration for this list, Glenn Frey, is such an enormous musical talent that it would be useless to rehash what he has done – you already know about that. As the years continue to roll by, we will be forced to say goodbye to a lot of our favorite artist from the glorious ‘80s. There is no way to avoid it, so let us, instead, celebrate them by remembering and cherishing what they created.