Happy 76th birthday to one of the greatest WWF villains of the ’80s, The Iron Sheik!!!

I’m the greatest Intercontinental Heavyweight Champion of all time 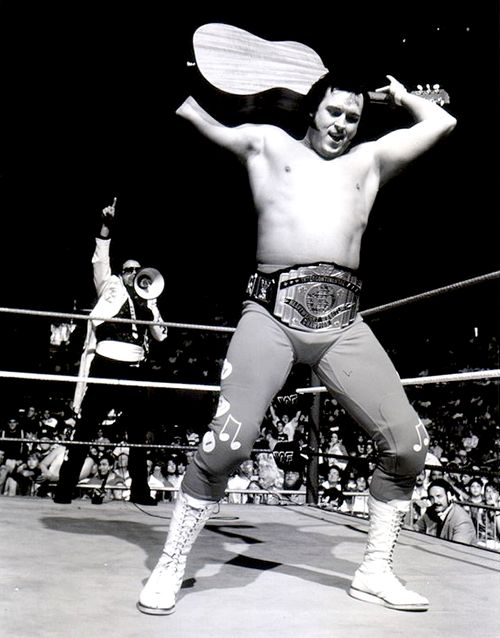 Everybody’s got a price for the Million Dollar Man

Question: What movie featured Stephen King’s son, Joe, as a boy who is punished by his father for reading horror comics?

Gorilla Monsoon began wrestling for the WWWF/WWF in the early ’60s until the early ’80s. In the early ’80s, Vincent J. McMahon’s son, current WWE CEO Vincent K. McMahon, began assuming the reins of the promotion from his father. The elder McMahon asked his son to take care of long-time employees that had been loyal to him. The younger McMahon agreed, and in 1982, Vince bought Monsoon’s shares in the company in exchange for a guarantee of lifetime employment. Then McMahon needed a new commentary team to head up his television programming. So he had Gorilla Monsoon do it alongside the recently retired Jesse “The Body” Ventura.

The two announcers had incredible chemistry and set the standard for years to come. Monsoon would by the pro-good guy “voice of reason” and Jesse would be pro-bad guy.

Here is the the main event of the first Wrestlemania with Gorilla and Jesse announcing:

When Ventura left the WWF in 1990, Monsoon was paired with villainous manager Bobby “The Brain” Heenan, another duo that subsequent wrestling commentary teams have often tried to emulate. The two also formed a real-life friendship which Heenan often recalls fondly.

Here is some great commentary with Gorilla and Bobby Heenan:

Monsoon stepped down as the WWF’s lead commentator at WrestleMania IX to make way for WCW recruit Jim Ross. In 1995, there was a storyline with Monsoon as the president of the WWF, in which he had to settle disputes between wrestlers and make matches. But by 1997, his health began to deteriorate, so the position was retired, and Sgt. Slaughter was named the new WWF Commissioner in August of that year.

Gorilla Monsoon died on October 6, 1999 of heart failure brought on by complications of diabetes, at his home in Willingboro Township, New Jersey. He was 62 years old. In a tribute that aired on WWF television after his death, McMahon described him as “one of the greatest men I have ever known.”

WCW commentator Tony Schiavone acknowledged Gorilla Monsoon’s death (at Bobby Heenan’s request) on the October 11, 1999 WCW Monday Nitro episode, even though Monsoon never worked for WCW. Heenan added: “Gorilla will be sadly missed. Now he was one big tough man. He was a decent honest man. And we’re all gonna miss him very much. And you know the pearly gates in heaven? It’s now gonna be called ‘the Gorilla position.’ Goodbye, my friend.”

When Heenan was inducted into the WWE Hall of Fame in 2004, he said in his acceptance speech, “I wish Monsoon were here.”

In addition to being known as a great guy, Gorilla Monsoon was also known for his colorful phrases during matches. Remember these:

“Will you stop?” (This was usually directed, in frustration, at co-commentator Bobby Heenan after he went off on one of his many heel-backing tangents or other rants.)

“This place has gone bananas!”

“History has been made!”

Question: How many seasons did Benson air on ABC?

Early in his career, the “The Fashion Plate of Professional Wrestling”, “Classy” Freddie Blassie was himself a wrestler. His heyday was in the 60s and early 70s. In 1974, he had to retire from active wrestling due to a California law that prohibited anyone over 55 from getting a wrestling license. He went on to become a manager in the World Wide Wrestling Federation and its subsequent incarnation the World Wrestling Federation.

Blassie had managed wrestlers such as Hulk Hogan (when Hogan was a bad guy), The Iron Sheik and Nikolai Volkoff, Adrian Adonis and Jesse “The Body” Ventura.
Here is an edition of Piper’s Pit with guests, “Classy” Freddie Blassie with his team of Nikolai Volkoff and The Iron Sheik:

Freddie Blassie retired in 1986, but made brief appearances at some events and in video packages. His final wrestling appearance was May 12, 2003 in Philadelphia, PA on Monday Night Raw, three weeks before his death:

In addition to be involved in wrestling, Freddie Blassie recorded voiceovers for songs that appeared on the Dr. Demento Radio Show (where Weird Al got his start). In 1983, Rhino Records released a 14 track album by Blassie, titled I Bite the Songs, which included one of the previous Dr. Demento songs – “Pencil Neck Geek”.