Full disclosure: I am first and foremost a Star Wars fan. I saw Star Wars in the theater, during its original run, when I was 6 years old. However, before that, my father introduced me to science fiction as we watched the original Star Trek series on TV. I also remember watching the Star Trek Animated Series.

In 1977, Star Wars was released, and it forever changed my pop culture life. I was obsessed, and could not get enough of sci-fi movies, television shows, and books.

I was unaware of it at the time, but in the mid ’70s, Gene Roddenberry tried to bring Star Trek back to TV with a new series called Star Trek: Phase II. However, production was cancelled. The reason? With the enormous success of Star Wars and Close Encounters of the Third Kind, the production company Paramount saw that science fiction could be successful at the box office. So, work began on a full length feature film.

I remember being so excited to go see Star Trek on the big screen. This was going to be so great! Instead, it ended up being the first disappointment in my movie-going life. I remember being so bored. Wasn’t there at least one fight in every Star Trek episode? I don’t think there was a single fight in this whole movie! And, I honestly don’t remember if I saw it again after that movie going experience.

Now that I’m older, maybe I’ll understand and appreciate the story a little more. Plus, I have just finished binge watching the entire original series. So, I’ll take a chance and subject myself to this movie again. And remember, Method. Madness. You’ll see.

So, let’s go ahead and get this movie started before this becomes known as Return to the ’80s: The Motionless Blog.

Here is the movie trailer if you want to check that out.

First, we have the theme song from Star Trek: The Next Generation. So far the music is a good start!

Holy crap! There were Klingons in this! OK, you have my attention!

All three ships got wiped out by some energy cloud, which is heading to Earth. Interesting.

He is going through some ritual on Vulcan where he is supposed to become totally logical. But, his heart lies elsewhere – like space.

Next, Kirk arrives at Starfleet in San Francisco. We learn that he is now an Admiral.

Now, we are on a space station where Kirk beams aboard, and Scotty is sporting a new mustache. Hair is the thing now I guess.

Next up is the infamous scene where Kirk and Scotty are on a shuttle checking out the newly retrofitted Enterprise. I think this takes up half the movie.

By the way, that is not a picture from the movie. It is actual movie footage, that’s how slow it is moving. zzzzzzzzzzz

We are finally on board the Enterprise. By the way, what is with the leisure suit/pajama look?!?

Now we meet the captain of the Enterprise, Captain Decker. Uh oh, he’s not captain for long. Egomaniac, Kirk is taking over the Enterprise to stop that energy cloud which is heading to earth. Decker is piiiiissssssed! 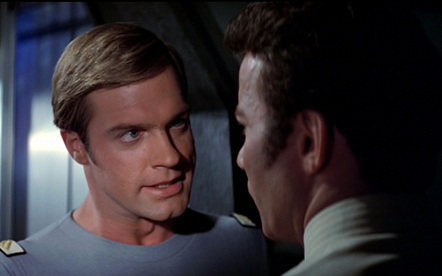 Next, we meet the new navigator, Ilia, or as she is better know in the Star Trek universe – The Bald Chick. And all the men on the bridge get excited – especially Decker. Buuut, all the men get “friend-zoned” as Ilia announces that she has taken an oath of celibacy.

A cranky Dr. McCoy gets pulled on to the Enterprise next. What is with all the hair in this movie!?! Now, McCoy is sporting a big scraggly beard.

OK, more than a half hour in, the Enterprise is finally leaving the station dock.

As soon as they get into warp, they enter a wormhole. Whoa, this is trippy. All the colors, distorted sound, and super slow motion movements. I don’t think I smoked anything funny. Maybe the wormhole is leading us back to the ’60s. This is taking forever. I think this is actually longer than that long scene of Kirk Eye effing the Enterprise earlier.

Now Spock has boarded the Enterprise. With his hair back to what we were used to seeing and McCoy clean shaven, things are getting back to normal. And I think Kirk was more excited to see Spock than Decker was to see Ilia.

Seriously, though I have always loved the chemistry between the three main characters. I especially love the banter between McCoy and Spock. It was great in the show, and they kept it up in the movies. Although there is no action right now, I do like seeing these three together.

Uh oh, here comes the energy cloud. It is closing in on the ship. They are being zapped by the cloud. Checkov’s hand gets burned, but that seems to be the only damage. Here comes another shot. They sent a friendship message to the cloud, and the projectile missed the ship.

But, they still don’t know anything about the cloud. So they fly into it. There are only 20 hours before it reaches Earth, so they can’t screw around. They need to figure this thing out.

Is this movie almost over yet?! ugh, a little over 1 hour in, and we’re not even halfway through yet!

Geez, that ride to the middle of the cloud took forever too! Well, at least a good 5 to 7 full minutes anyway. They are really stretching this out!

Finally! There is an intruder alert. Some vertical laser beam is making its way around the bridge. Ilia gets zapped and disappears.

Now a tractor beam is pulling the Enterprise further into the cloud.

Decker suggests shooting phasers to break free.
Spock says a variation of one of the most iconic phrases in Star Trek lexicon…Why bother. Showing resistance would be futile.

Alerts are going off again. Ilia is back, and is dressed in something a little more comfortable.

But it’s not Ilia anymore. Somebody called V’Ger has taken over her body. The gang tries to find out what V’Ger wants. V’Ger wants to find the creator.

Now Decker is spending time with Ilia/V’Ger to figure out what’s going on and trying to see if they can bring back Ilia’s memories.

Spock goes rogue, and Vulcan nerve pinches a “red shirt”, gets a space suit on, and jet packs over to the data center of the cloud.

They find out that the cloud is a living machine.

Kirk tells V’Ger that he can’t tell the “probe” Ilia/V’Ger about the creator, but needs to go to the main V’Ger computer. She takes the Enterprise there. Kirk, Spock, McCoy, Decker, and Ilia/V’ger leave the ship and walk over to the data center of the cloud/ship. It is a big satellite dish.

They approach the satellite. There is writing on the side.

Oh wait, it’s not V’Ger. It’s Voyager. Specifically Voyager 6, a 20th-century Earth space probe believed lost. It turns out that the damaged Voyager 6 was found by an alien race of living machines that interpreted its programming as instructions to learn all that can be learned, and return that information to its creator. Spock realizes that the machine wants to merge with the creator, not just speak to it. If not, it will most likely destroy Earth. What!? Merging with it also means merging with Ilia/V’Ger!? Decker can’t volunteer to sacrifice himself fast enough!

They merge, and Decker finds himself in 7th Heaven

The cloud disappears, and the world is saved! Hallelujah, the movie is over!

OK, this was as boring as I remembered. Maybe even more boring than I remembered! It seems like they had a mediocre story line for the television show, and dragged it out by having extremely long scenes of floating around.

Despite the bad reviews, and not-so-great audience reviews, the movie would go on to gross $139 million worldwide. This is a good thing, because that may have been the end of the road for Star Trek for a while. Instead, we got some sequels that followed were so much better than the original movie. And it spawned off another awesome show, Star Trek: The Next Generation.

Did any of you see the movie in the theater, or even see this movie at all? What did you think? Did you like this review? Let me know what you think.

One thought on “Star Trek: The Motion Picture”