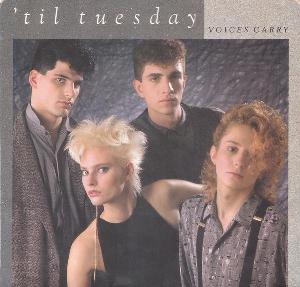 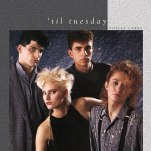 In honor of Aimee Mann’s birthday today, the song of the day is “Voices Carry” by ‘Til Tuesday. This is the title-track of ‘Til Tuesday’s debut album. The single was released on March 28, 1985. It was the band’s highest-charting single and their only top ten hit in the U.S., peaking at number eight on the Billboard Hot 100. Internationally it reached the top twenty in Canada and Australia.

Speaking on the podcast Conan O’Brien Needs A Friend, Mann explained what inspired the lyric: “I wrote it about a friend of mine – a male friend – who was talking about a relationship where the girl didn’t want to be affectionate with him in public, like, ‘Keep your voice down, don’t tell people we’re going out.’ The reason I related to that story was because of my history.”

The music video earned ‘Til Tuesday an MTV Video Music Award for Best New Artist. The part where Mann causes a scene in the theater (the interior shots were filmed at the Strand Theater in Dorchester, Massachusetts) is iconic of the early MTV era. Mann later dipped a toe into acting. Look closely in the scene in The Big Lebowski where the nihilists are ordering pancakes and the gal on the end has a foot cast as the camera pans down – yep, that’s Aimee Mann!