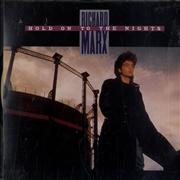 In honor of his birthday today, the Song of the Day is “Hold On to the Nights” by Richard Marx. This song was the fourth and final single released from his self-titled debut album, and his first to reach number one on the US Billboard Hot 100 chart. His next two singles, “Satisfied” and “Right Here Waiting,” also made the top spot. When it hit the number 1 spot on July 23, 1988, it prevented Def Leppard’s “Pour Some Sugar on Me” from reaching the top spot that same week.

According to Songfacts, when you meet the love of your life, but you are both already with someone else, you have a big decision to make and maybe a script for a romantic comedy. You might have to live with just the memories of your time together, holding on to the nights you’ve spent with each other.

Richard Marx tells us that this wasn’t something that happened to him, but it did happen to someone he knew. Said Marx: “A friend of mine went through exactly that. There were parts of it that I could really relate to, but this guy just thought that he was in the right situation, but he met somebody else, and he was, ‘Ohhh…’ and the girl was involved with somebody already at the time, and they just never got together. They never made a go of it. I’ve lost touch with this guy over the years, but I remember him thinking, what if I had missed the right one. And all he had left was a brief time where they were hovering around each other and then they both ended up going back to who they were with. I don’t know if they ultimately stayed together. Maybe they even got together years later. I don’t know, because I lost touch with him. But that came through that, came through this guy that I knew and was going through exactly that.”

Here is the full interview.